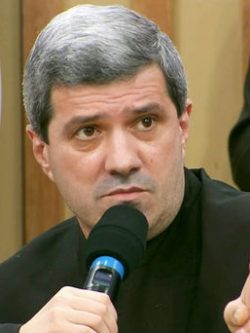 ŠAHNAZAROVS, Mihails (Latvian spelling) is a host on the Tsargrad TV channel, and also he collaborates with RT. Born in Riga, Latvia, he studied at the All-Russian State University of Cinematography (VGIK). Then he tried to do business. According to some reports, he led the Moscow branch of one of the Latvian banks and owned an insurance company. After that, he became involved in journalism. For seven years, he headed the sports department of the largest Russian newspaper in the Baltic countries, Vesti Segodnya. He worked at the Latvian radio station SWH +, where he conducted sports reviews. Shakhnazarov is not widely known to the public in his native Latvia. However, the Russian propaganda media call him an expert, political scientist, writer, and publicist. With this status, he is regularly invited to political talk-shows on Russian federal TV channels.

Mikhail Shakhnazarov is a regular participant in propaganda talk-shows on Russian television. He regularly makes insulting comments about the Russian opposition, foreign politicians, and anyone who disagrees with the actions of the Putin regime. In particular, he called the opposition leader Alexei Navalny “a media and political prostitute,” candidates for the President of Ukraine Petro Poroshenko and Vladimir Zelensky “cheap whores.” These and other statements by Shakhnazarov appear in the most extreme propaganda resources, such as the Tsargrad TV channel.

In his speeches, Shakhnazarov invariably supports the illegal annexation of Crimea and Russia’s aggression against Ukraine. He is included in the Ukrainian Myrotvorets database for “Consciously violating the State border of Ukraine with the aim of entering the Crimea captured by Russian occupiers.”