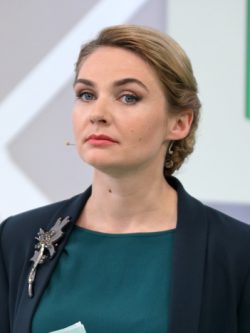 SHAFRAN (nee PALYUKH) Anna Borisovna began her career in Tver as a DJ on Nashe Radio. In 2003, Palyukh-Shafran moved to Moscow and began working as a DJ on the Silver Rain radio station. In 2004, she became the host of the Orient Express program. She lived for some time in Egypt, and that is where she took herself the pseudonym Shafran (Saffron). In 2008, she began working with the infamous propagandist Vladimir Solovyov on the morning shows Nightingale Trel, Once Upon a Rain (with Leonid Volodarsky) and Breakfast for Champions (with Alex Dubas). In 2009, she graduated from the Faculty of History of RUDN University.

Since September 2010, she has been working at state radio station Vesti FM as the co-host of Vladimir Solovyov’s Full Contact morning show, and also runs her program Principle of Action. She regularly performs in Solovyov’s propaganda talk show Kto Protiv on the state TV channel Rossiya-1. Since September 2019, she has been anchoring a newscast The Main with Anna Shafran on the Spas TV channel, owned by the Moscow Patriarchate.

According to unconfirmed reports, in 2008 she gave birth to a son from Vladimir Solovyov.

A faithful student of one of the most odious pro-Kremlin propagandists, Vladimir Solovyov, Anna Palyukh-Shafran organically fits into the new wave of informational accomplices of the Putin regime. Shafran's style is to shout over the opponent in emotional demagoguery, to force an opponent to refute a completely obvious lie. The former DJ from Tver is now an expert in international politics, and in particular, an expert on Ukraine.

Anna Shafran ended up in the Ukrainian Myrotvorets database for a series of derogatory comments about Ukraine, the Ukrainian language and culture, for regularly visiting the illegally annexed Crimea, and for spreading misinformation about the “Nazi rampant in Ukraine.” Even though she regularly publicly incites disdain and hatred of Europe and basic European values, Shafran enjoys traveling in the EU and the USA.

Anna Shafran is a female version of Vladimir Solovyov, and in all her broadcasts, she invariably expresses a pro-Kremlin point of view. Like Solovyov, she regularly criticizes the participants and leaders of the democratic opposition aggressively, indiscriminately accusing them of Russophobia and cooperation with foreign intelligence. She called the Free Russia Forum a coven, and its participants a bunch of sheep and goats. She did not hide her satisfaction with the criminal prosecution of participants in peaceful protests against the prohibition of independent candidates from running in the elections to the Moscow City Duma: “Fools-hamsters of a beauty blogger began to get prison sentences. The mission of street opposition/Navalnysts is completed. Young morons go to jail for them.”

In 2018, Anna Shafran presented her book, “State of Honor. The monarchy is the future of Russia.” There, she concluded that the best state system for modern Russia “was and remains the monarchy.” Palyukh-Shafran made a scandal during the non-fiction book fair in Moscow when she was given time for the special presentation of this book. She regarded this as censorship. It is noteworthy that on the same day she published a post on Twitter where she called for independent environmental NGOs to be included to the list of so-called “foreign agents,” that is, preventing them from working freely in Russia.

The autocratic monarchy not accountable to the people is the only hope for Shafran, which guarantees her prosperous and safe future. This is not surprising since otherwise, propagandists like Solovyov and Saffron will have to bear responsibility for years of misinformation, diligent service to the criminal regime, inciting hatred for their dissenting fellow citizens and neighboring nations in the interests of a corrupt ruling group.