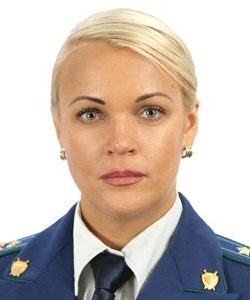 SEMENENKO, Maria Eduardovna (b. 1972 in Moscow) was suspected of extortion in 1991, according to old police reports. Since at least 1999, she has worked in the Prosecutor's Office, and in 2001 she defended her dissertation at the Research Institute for the Enforcement of Law and Order. Currently, Semenenko is the Senior Prosecutor of the State Prosecutors Department of the Moscow Prosecutor's Office. He specializes in high-profile jury trials.

Using her official position to exert extrajudicial pressure on the jury, abuse of office.

In Russia, a jury trial is the defendant’s only hope for acquittal. Ordinary citizens with no connections to public officials or judicial authorities and who do not observe corporate solidarity with the investigating and prosecution authorities can become jury members. Therefore, the percentage of acquittals in jury trials in Russia is much higher than in professional courts. Compared to less than half a percent of acquittals in Russian courts in general, jurors pass acquittals in about 20% of cases. In these conditions, the repressive Russian prosecution has to use dirty methods and tricks to influence the jury to achieve the desired result.

The prosecutor Maria Semenenko presents the most striking example of such prosecutorial work, and it is no coincidence that she is entrusted with the most high-profile cases: the murders of Boris Nemtsov, Anna Politkovskaya, Yuri Budanov, Yegor Sviridov, the case of the former head of the Main Investigation Department, Dovgiy, the case of Ilya Goryachev and others. In her work, she uses not only the manipulation of facts in violation of judicial procedures. According to a few testimonies, her assistants exert direct pressure on the jury, including removal from the jury, surveillance, bribery, and threats of physical violence.

Back in 2004, during the trial of entrepreneurs Igor Poddubny and Evgeny Babkov, accused of smuggling cigarettes into Russia and causing damage to the state of 22 million rubles, the first jury was dismissed for suspicious reasons. One of the jurors suddenly got sick, and the other two said that prosecutors, including Semenenko, were offering them money for a guilty verdict. During the trial, Semenenko sent law enforcement officers to the businessmen’s attorney who wreaked havoc in his apartment.

In 2009, the former head of the main investigative department, Dovgiy, was on trial, charged with his inspection of the unlawful activities of investigators in the Yukos case. On the day the verdict was passed, one of the jurors, the most critical of the prosecution, was removed from the jury.

In her speeches, Semenenko regularly appeals to the life circumstances of the accused, although, according to the law, the parties to the trial have no right to discuss the details of the biographies of the defendants with the jury.

In 2011-2012, during the trial of Dmitry Lesnyakov, who was called the organizer of one of the Moscow gangs, other interesting episodes occurred. One of the jurors at the trial was journalist Ivan Golunov, and, according to him, he was constantly under surveillance, which Semenenko later admitted. Similarly, in this trial, the unjustified removal of the jurors, whose position did not suit the prosecution, happened again. According to Golunov, Semenenko “very carefully monitors people's emotions and listens to what they are talking about when they cry out or sob.” According to the head of the Agora human rights group, Pavel Chikov, “employees of the Ministry of Internal Affairs and the FSB, when they need a specific prison sentence, often carry out operational work against the jury and collect incriminating evidence against them. Therefore, the jurors often don’t try to make acquittal decisions as they are constantly at risk - they are threatened, the pressure is put on them.”

A significant number of other trials where Semenenko was the prosecutor, including the cases of the murder of Anna Politkovskaya and Yury Budanov, were also noted by the removal of individual jurors or the replacement of the jury altogether. Analyzing the mood of the jury, she then passes the “dirty work” to her henchmen: “she never works alone: ​​in fact, the operatives of different bodies do all the work for her,” says lawyer Viktor Parshutkin. According to him, “she is very mediocre as a processualist, but I have never met a more impudent and haughty prosecutor in my life. She uses dirty methods, to put it mildly.”

Through prosecutors such as Maria Semenenko, the modern Russian state is profaning the adversarial court and the right of citizens to objective justice, even where there is still a chance to achieve some justice. Her participation in politically motivated cases makes her an accomplice to political repression and concealment of the facts of state arbitrariness in the interests of the current political regime. A free Russia would need serious judicial reform, which would declare Semenenko’s methods as totally unacceptable.