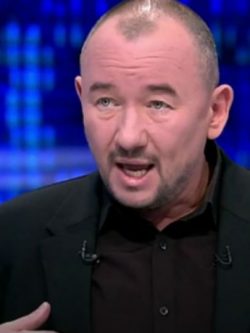 SHEININ, Artem Grigoryevich (b. 1966) is the Russian propagandist and presenter of the talk show Vremya Pokazhet (Time Will Tell) on the state-controlled Channel One. Since 2008, he has also been the director of the Pozner program. Since July 2017, he has been hosting the talk show First Studio on Channel One.

Active participation in aggressive state propaganda of the Putin regime, that is, of the creation and dissemination of intentionally distorted information in the interests of the political leadership of the Russian Federation, deceiving people and instilling aggression, an atmosphere of hatred and political intolerance in the public opinion, support for Russian aggression against Ukraine.

Artem Sheinin plays an image of an emotionally unstable person and sometimes attacks guests physically. He once even brought a bucket of feces in a television studio for a Ukrainian blogger Sergei Zaporizhsky. In early 2018, in an interview on MediaMetrics radio, he compared his work as a TV presenter with the fighting in the Donbas. At the same time, he noted that he did not go to war because of his age. However, he collaborates with pro-Russian terrorist organizations operating in the east of Ukraine. In January 2018, he visited Russia-occupied Donetsk, where he met with the leaders of the insurgents. In his live broadcasts, he promotes ethnic hatred between the Ukrainians and Russians, denies sovereignty and territorial integrity of Ukraine, and slanders Putin’s opponents in Russia.