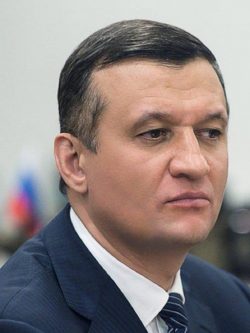 Member of the State Duma of the Russian Federation from the LDPR and the United Russia party.

Date and place of birth: May 25, 1971, Novosibirsk. Education: 2012 - Russian Academy of National Economy and Public Administration under the President of the Russian Federation, 2009 - Siberian Academy of Public Administration, 2001 - Novosibirsk State Academy of Economics and Management. From 2002 to 2008, he was a Director of LLC Fundamentstroy, 2008-2009 - Director of LLC Stroyindustriya. Between 2009 and 2013, he was a coordinator of the Kemerovo regional branch of the Liberal Democratic Party. In 2010-2011, he was an Assistant to Arkady Svistunov (member of the State Duma of the 5th convocation) for the Kemerovo region. Since 2011, he has been a member of the State Duma of the Russian Federation from the LDPR and the United Russia party. Membership in political parties: since 2021, the United Russia, 2008 - 2021 Liberal Democratic Party (LDPR) of Russia.

Savelyev is a co-author of a number of bills restricting the rights and freedoms of citizens, in particular:

● Bill No. 1165649-7 On Amending Article 4 of the Federal Law “On Basic Guarantees of Electoral Rights and the Right to Participate in a Referendum of Citizens of the Russian Federation” and Article 4 of the Federal Law “On Elections of Deputies of the State Duma of the Federal Assembly of the Russian Federation” (in terms of limiting the passive electoral right of persons involved in the activities of extremist or terrorist organizations) restrict the citizens recognized as extremists on the basis of politically motivated court decisions the constitutional right to be elected.
● Bill No. 1057895-7 On amendments to the Federal Law “On Education in the Russian Federation” (in terms of conducting educational activities) - limits the freedom of scientific creativity and teaching guaranteed by the Constitution, as well as freedom of thought and speech, delegating to the Government the functions of control over educational activities. By equating some forms of educational activity with “anti-Russian propaganda,” the bill makes it possible to hinder the implementation of such activities for political reasons.
● Bill No. 1057892-7 On amendments to certain legislative acts of the Russian Federation (in terms of clarifying the rights and obligations of subjects performing the functions of a foreign agent) restricts the constitutional right of equal access to public service and the right to be elected for some candidates running in elections, recognizing them as “foreign agents” for political reasons and obliging them to indicate this information publicly, which may entail reputational risks.