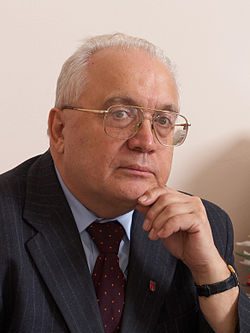 SADOVNICHY, Victor Antonovich (b. 1939) entered the Faculty of Mechanics and Mathematics at Moscow State University in 1958. In his student years, he was actively moving up the Communist Party ladder: he was the chairman of the student committee and the secretary of the Komsomol organization of the faculty.

After postgraduate school, he worked at Moscow State University as an assistant, associate professor, professor, Deputy Dean of the Faculty of Mechanics and Mathematics for scientific work, head of the Department of Functional Analysis and its Applications at the Faculty of Computational Mathematics and Cybernetics. Since 1982, he has been the head of the Department of Mathematical Analysis of the Faculty of Mechanics and Mathematics. He was Deputy Vice-Rector, Vice-Rector (from 1982 to 1984), First Vice-Rector (from 1984 to 1992). During the Soviet years, he was an active member of the Communist Party and a member of the Party committee of the Moscow State University. In the 1970s and 1980s, he held senior positions on the selection committee for enrollees at Moscow State University. In this post, he was repeatedly suspected of deliberately pursuing a discriminatory policy to prevent enrollees of Jewish descent from entering the faculty.

In 1992, Sadovnichy won the alternative election of the rector of Moscow State University, despite the objection of the Minister of Science because of Sadovnichy’s membership in the Communist Party committee. In 1996, 2001, 2005, Sadovnichy was re-elected to the post of the rector on an uncontested basis. For the last two terms of five years, he was already appointed by the president, for which it was necessary to change the charter of Moscow State University and to issue a presidential decree that deprived the university of its autonomy.

Serving the corrupt interests of the ruling regime, the destruction of academic freedoms and university autonomy, unjust enrichment.

Viktor Sadovnichy always knew how to adapt to changing conditions and to use them to concentrate his power. He owed his career advancement at Moscow State University during the Soviet years, first of all, to party-administrative work and impeccable loyalty to the communist regime, not to scientific talents. Despite the enormous amount of scientific articles and works attributed to Sadovnichy since the 1970s, the level of his work lags noticeably behind actual science, and his works have a low level of citation. Allegations of deliberate discrimination against applicants of Jewish origin directly related to Sadovnichy’s activities as the chairman of the central admissions committee and vice-rector of Moscow State University in the 1970s and 1980s. In particular, it applies to the Faculty of Mechanics and Mathematics of Moscow State University. According to physicist Mikhail Shifman, “Sadovnichy pursued this policy, he made arrangements with professors and gave lists of those who are to be failed at the exams.”

Sadovnichy was able to adapt comfortably in post-Soviet Russia. Having won the scandalous rector election in 1992, he no longer allowed competition: all subsequent rector elections were held on a no-alternative basis, and with the advent of Putin, he openly and consistently pursued a policy of strict centralization. As a result, when in 2009 Sadovnichy reached the age limit for becoming a rector, all the formalities were eliminated in a short time: the academic council already loyal to the rector rewrote the university charter, and President Medvedev issued a decree appointing Sadovnichy as rector for the next term. That year, there were rumors about a change of the rector of Moscow State University, but it was then that the orientalist Yekaterina Tikhonova-Putina approached Sadovnichy after his seminar and said that she wanted to do applied mathematics. Sadovnichy took her to the Mechanics Faculty and became the scientific supervisor of the “young talent,” and, accordingly, retained his position. In May 2019, exactly the day before the defense of Putina’s dissertation, Sadovnichy received the Order of Merit to the Fatherland of the 1st degree from the hands of his student's father.

In 2018, according to a government decree, faculty staff and students of Moscow State University lost the opportunity to amend the university’s charter. Moreover, the decision expanded the grounds for expelling a student from a university. According to the representative of the independent trade union University Solidarity Andronik Arutyunov, the charter could not be changed without the consent of the rector of Moscow State University: “He is trying to deprive other employees and students of even a hypothetical opportunity to influence the life of the university. Changes in the charter clearly fit into this strategy... This is a demonstrative step.”

Under Sadovnichy, Moscow State University became a market for a status upgrade of many pro-Kremlin politicians, many of whom received even newly-created faculties. So, the Faculty of World Politics is headed by a former Duma member from the United Russia party Andrei Kokoshin, the dean of the Public Administration Faculty is another United Russia functionary Vyacheslav Nikonov and the Higher School of Television is headed by the pro-government political scientist Vitaly Tretyakov. Speaker of the Duma Vyacheslav Volodin heads a department at the Faculty of Public Administration, and Leonid Slutsky, the head of the Duma Committee on International Affairs who was accused of harassment, heads the department of International Relations and Integration Processes at the Faculty of Political Science.

Sadovnichy accumulated solid assets for his long service to the Kremlin. He twice nominated himself for the 3 million rubles award with the permission of the government, and also owns elite real estate in the suburbs of Moscow. on Rublevka and in Istra, next to the mansions of high-ranking officials. All his children were employed by the university, and his daughter Anna was a member of the Board of the now-bankrupt Peresvet Bank, which the media called the wallet of Sadovnichy and Patriarch Kirill. While ordinary professors of Moscow State University often leave the university due to low salaries and bureaucratic workloads, since 2013, the salary of the Moscow State University rector has grown almost six times, while the salary of a department head has increased by only 4%.

Sadovnichy was associated with the persecution of MSU students for their political views. He defiantly refused to support the arrested MSU graduate student Azat Miftakhov in January 2019 on suspicion of assaulting a local office of United Russia. Reportedly, he was tortured by police and FSB officers and many world-famous mathematics stars expressed support of him. Moreover, two months later, Sadovnichy offered the Ministry of Education and Science to amend the charter of Moscow State University so that students under the criminal investigation could be expelled, but in May, after facing criticism of the amendments, he changed his mind and withdrew the proposal.

Victor Sadovnichy is an example of an opportunist and gerontocrat who achieved his position by his allegiance to the criminal government and made the world-famous university his patrimony. The Komsomol activist, a member of the CPSU and United Russia, would fall under lustration with full-fledged democratization of the country, freeing up its place for people with an unsullied reputation. And though at the end of 2019, Putin prolonged his rector term, we want to believe that sooner or later the name of Sadovnichy will sink into the past as only one of the few shameful pages in the history of the Lomonosov Moscow State University.