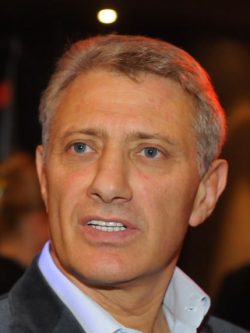 ROTENBERG, Boris Romanovich (b.1957) is a Russian oligarch and a close confidant of Vladimir Putin. Born in Leningrad, from 1968 he was involved in the judo section at a youth sports school alongside Putin. In 1978, he graduated from the Leningrad Institute of Physical Culture and Sports and became a professional judo trainer. In 1991, he moved to Finland and together with his brother Arkady, participated in barter deliveries. At that time, they cooperated with the Committee on External Relations of the Government of St. Petersburg headed by Vladimir Putin. In 2001, the Rotenberg brothers bought a stake in the Northern Sea Route Bank (SMP Bank) and became Gazprom partners. Boris Rotenberg has registered several trading companies for the purchase and supply of pipes for Gazprom. In 2008, the brothers purchased five construction companies from Gazprom. Based on them, they created the Stroygazmontazh corporation (SGM). In 2009, Stroygazmontazh became the main partner of Gazprom. In 2010, the brothers acquired the company Northern European Pipe Project, which sold large diameter pipes to Gazprom. In the same year, they bought back 100% of the shares of Mosenergo Heat and Power Company OJSC from Gazprom. Boris Rotenberg holds Finnish citizenship.

Russian and international media believe that Boris Rotenberg made a fortune by obtaining numerous contracts with the government and state-owned companies bypassing competition due to his friendly relations with Vladimir Putin. Like many other Putin’s accomplices, Boris Rotenberg was named in the Panama Papers.

In 2014, in connection with the violation of the sovereignty and territorial integrity of Ukraine, the United States imposed sanctions on Boris Rotenberg, and the SMP Bank controlled by him. However, unlike his brother Arkady, Boris Rotenberg did not fall under EU personal sanctions thanks to his Finnish citizenship. However, the EU blacklisted Boris Romanovich Rotenberg's company Giprotransmost for conducting the feasibility study of the construction of a bridge between Russia and the annexed Crimea.

In 2018, the Organized Crime and Corruption Reporting Project (OCCRP) published an investigation according to which Boris Rotenberg owns several luxurious villas on the French Riviera. OCCRP experts noted that Rotenberg owns the property through a complex offshore ownership scheme for tax evasion.