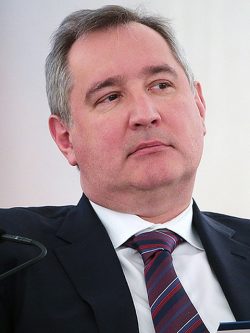 ROGOZIN, Dmitry Olegovich (b. 1963) was born into a Soviet nomenklatura family. His father was Lieutenant General, Deputy Head of a department in the Ministry of Defense of the USSR. In 1981, he entered the international department of the Faculty of Journalism at Moscow State University, and in 1983 he married Tatyana Serebryakova, daughter of Colonel Gennady Serebryakov, an employee of the First Main Directorate of the KGB (foreign intelligence). As a trainee correspondent, he finds himself in the main editorial office of the Central Television and Radio Broadcasting Information and the main editorial office for Latin America of the Novosti Press Agency. In 1986 he graduated with honors from the Moscow State University, and in 1988 - from the economics department of the University of Marxism-Leninism at the Moscow City Committee of the Communist Party.

In the KMO, Dmitry Rogozin worked in the sector of Southern Europe, the USA and Canada, in 1988 he became the head of the Sector of International Organizations. At that time, perestroika was already underway in the USSR, and democratic and national liberation movements were growing. The communist system and the Soviet Union was approaching its collapse. Due to these circumstances, the party-communist career ceased to interest Rogozin, and he began to look for other opportunities for participation in political activity.

In the early 1990s, he joined the Constitutional Democratic Party of Russia - the Party of People’s Freedom (KDPR-PNS), headed by the People's Deputy of the RSFSR Mikhail Astafyev, and was elected Deputy Chairman of the party. In January 1990, he became a founder, and in May 1990, he was elected president of the Association of Young Political Leaders of the USSR, also known as Forum-1990. In August 1990, Rogozin left the Committee of Youth Organizations of the CPSU, which became useless for him in the new political conditions.

In 1992, Dmitry Rogozin, together with a nationalist politician Andrei Savelyev created the Russian Revival Union. In March 1993, having gathered representatives of the Russian communities of the CIS and Baltic countries, as well as representatives of autonomies within Russia, Rogozin created the Congress of Russian Communities, which was, according to the creators, to protect of the rights of Russian-speakers outside of Russia.

In 1993 and 1995, Rogozin made attempts to get into the State Duma, but he did not succeed. Finally, in March 1997, Rogozin was elected to the State Duma, where he joined the Russian Regions group and got the post of deputy chairman of the Committee on Nationalities. In 1999, Rogozin was re-elected. In the State Duma, he was a member of the People’s Deputy parliamentary group and the chairman of the State Duma Committee on Foreign Affairs. He led the delegation of the Federal Assembly of the Russian Federation to the Parliamentary Assembly of the Council of Europe (PACE). In September 2001, he took part in the constituent congress of the People’s Party of Russia, where he was elected Deputy Chairman.

In 2003, Rogozin, together with Sergei Glazyev and other politicians of the left-patriotic and national-patriotic orientations, created the electoral bloc Rodina (Homeland). On September 14, 2003, he became a co-chair of the Higher Council of the Rodina Bloc. In the 2003 elections, Rodina got to the State Duma, and Rogozin became the Deputy Chairman of the State Duma and the head of the faction. The Rodina faction positioned itself as an opposition force, but in reality, it was a project of the Presidential Administration and personally Vladislav Surkov. At the same time, Rogozin proudly called himself and his party members “special squad of the president,” emphasizing his loyalty to Putin.

In March 2006, after a xenophobic scandal involving the Rodinф party, Dmitry Rogozin left the post of the party chairman, and in April 2006, he left the post of head of the faction. After this, Rodia declined rapidly, lost its influence and then disintegrated. At the end of 2006, the restoration congress of the Congress of Russian Communities under the new name Rodina: Congress of Russian Communities took place, where Rogozin was elected chairman of the movement. The same year, Rogozin joined the public council of the Russian March, the largest nationalist public event at that time. The following year, Rogozin supported the new national-patriotic association called Great Russia. However, after the refusal to register the movement as a party, he lost interest in it. Subsequently, Rogozin's activity was focused on his organization, Rodina: Congress of Russian Communities, which, in the end, was registered as a party in 2012. After that, Rogozin stopped any public party activities and became a civil servant.

A few years earlier, in 2008, Rogozin had been appointed Permanent Representative of Russia to NATO. In April 2009, Rogozin was given the highest diplomatic rank for the Ambassador Extraordinary and Plenipotentiary.

In February 2011, Dmitry Rogozin was appointed Special Representative of the President of the Russian Federation for Cooperation with NATO. At the end of 2011, Rogozin received a promotion, becoming Deputy Chairman of the Government of the Russian Federation. In his new position, he oversaw the military-industrial complex, state defense contracts, national defense, mobilization training, maritime, nuclear and space rocket policy, shipbuilding, aviation, radio-electronic industry, export control, military-technical cooperation, civil defense, border policy, the Arctic, as well as construction of the Vostoсhny spaceport.

In January 2012, President Medvedev appointed Rogozin the chairman of the military-industrial commission under the Government of the Russian Federation. In September 2014, Rogozin was appointed head of the commission for monitoring the construction of the Vostochny spaceport, and in 2018 he headed the Roscosmos state-owned corporation. The last place of work turned out to be the most scandalous for Rogozin, since in May 2019 the Prosecutor General’s Office and the Investigative Committee of the Russian Federation announced multibillion-dollar thefts at Roskosmos.

Active propaganda, ideological, and organizational complicity in the establishment of the anti-democratic, dictatorial regime in Russia.

For many years, working in various positions in political parties, in the public service and the state corporation, Rogozin consistently defended the interests of the ruling regime. Depending on the situation or on the position taken at a particular moment, he either directly represented the interests of the Kremlin, as it was during his work as the representative of the President in NATO or acted as a veiled agent of the Kremlin when he worked in opposition movements.

His activities in the “opposition” field are of particular interest. The aforementioned Rodina electoral bloc was created to accumulate a left-patriotic and nationalist electorate and to take away votes from the main rival of United Russia, the Communist Party. This task was accomplished: the Rodina electoral bloc was able to win the sympathy of a part of the traditional Communist Party electorate, get to the State Duma and form its faction there. To achieve the goal, Kremlin’s spin doctors used mixed left-right rhetoric when creating the electoral bloc. The same approach applied to the selection of candidates for leaders and members of the Rodina election list. So, the frontmen were Rogozin who had a reputation of a national patriot, leftist Glazyev and a former member of the State Emergency Committee, Varennikov. According to leaked information, Vladislav Surkov, then the deputy head of the Presidential Administration, personally selected candidates for the Rodina election list. Making it to the State Duma and forming a faction, Rodina continued to position itself as an opposition party, however, as mentioned above, Rogozin emphasized his loyalty to Putin.

Although Rodina successfully coped with the tasks set, due to its increased popularity, the Kremlin decided to abolish it. After the controversial xenophobic video for the Moscow City Duma election, Rodina was withdrawn from all regional elections, and then actually broke up. However, Dmitry Rogozin was able to find his bearings in this situation, having joined the organizers of the Russian March and continued his political activity as an allegedly counter-systemic politician.

Participation in the most important public event of the nationalists did not prevent Rogozin from continuing his career in the civil service. Already in 2008, he exchanged his participation in the organizing committee of the Russian March for a prestigious and promising post of Permanent Representative of Russia to the NATO in Brussels. This was impossible without recognition by the Kremlin of its “merits” during his active party activity. Otherwise, it is impossible to explain such a high appointment of the “opposition” nationalist politician. Especially, given the fact that the Russian nationalists themselves were subjected to serious persecution by the state. For example, in 2009, another organizer of the Russian March, the head of the Movement Against Illegal Immigration (recognized as an extremist organization in Russia now) Alexander Belov (Potkin), was convicted of inciting ethnic hatred, and his brother and co-leader of the movement (Vladimir Basmanov) had to emigrate under the threat of criminal prosecution. As we can see, nothing of the kind happened to Dmitry Rogozin. On the contrary, after intensifying his “opposition” activities, he received a high governmental position.

The Kremlin’s hopes that Rogozin will follow Putin’s course in foreign policy have come true. As Rogozin himself said, after his appointment: “Russia's foreign policy should be like a steel fist in a soft glove,” emphasizing thereby that he intends to pursue a tough foreign policy course through diplomatic means. However, he avoided scandals at this position. Summing up his activities in this position, Rogozin said: “Russia and the West have no antagonistic contradictions. It is necessary to abandon political confrontation.”

The most scandalous for Rogozin was his work as head of the state-owned corporation Roscosmos. Firstly, thanks to his infamous statements, and, secondly, because of the corruption scandal that erupted around his department.

So, in April 2014, in response to the US sanctions, Rogozin advised the Americans to deliver their astronauts to the International Space Station in trampolines. And in July 2017, Rogozin’s rude and defiant post on Twitter almost led to an international scandal. In response to the refusal of the Romanian authorities to let his plane go to Chisinau, where he was going to meet with the new President of Moldova Dodon (the Romanian authorities explained their ban by saying that Rogozin is on the sanctions list), he wrote: “Wait for an answer, you bastards.” In turn, the Romanian authorities called his tweet “to put it mildly, inappropriate” and stated the need to strengthen the country's defense.

On November 21, 2019, Anti-Corruption Foundation (FBK) released an investigation about Dmitry Rogozin. The investigation told about Rogozin’s multi-million dollar salary that exceeded the salary of the head of NASA, as well as houses and land owned by him and his father-in-law. According to estimates of the Anti-Corruption Foundation, the cost of Rogozin’s house is approximately 200 million rubles, that is, an amount greater than what he could earn as an official in his entire life. The cost of the house of father-in-law Rogozin, according to FBK estimates, is approximately 150 million rubles. Rogozin’s father-in-law is a retired KGB officer whose income does not allow him to acquire so expensive real estate.