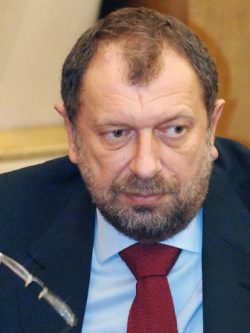 Member of the State Duma, businessman

REZNIK, Vladislav Matusovich (b. 1954) is a Russian businessman, lobbyist, and politician with criminal connections. Born in Leningrad, in 1976 he graduated from the Faculty of Biology of the Leningrad University and enrolled in graduate school at the Moscow Institute of Development Biology. In 1979-1987, Reznik was a junior research fellow at the All-Union Scientific Research Technological Institute of Antibiotics and Medical Enzymes and also worked as a stunt performer at various film studios. In the late 1980s, Reznik and his friend Dmitri Rozhdestvensky founded the movie production company Russian Video. The company also became a co-founder of the Rus insurance company as well as the Rossiya Bank. In the early 1990s, the associates of the then head of the Committee on External Economic Relations of St. Petersburg, Vladimir Putin, acquired control over the bank. According to the media, another future Russian president, Dmitri Medvedev, worked at the Rus insurance company. In 1995, Vladislav Reznik moved to Moscow, and from 1995 to 1998 he was Chairman of the state insurance company Rosgosstrakh.

Vladislav Reznik is an experienced lobbyist who achieved his position by a combination of successful circumstances and controversial relationships. Starting with the Russian Video, which, according to journalists, had the KGB and mafia leader Mikhail Mirilashvili behind it, Reznik collaborated with state security services and the criminal world. In the State Duma, Reznik launched a tumultuous activity, initiating or supporting more than 270 bills, most of which imposed various business regulations. He also actively promoted the interests of Zakhar Smushkin, the head of the Ilim Pulp Enterprise forestry holding.

He turned out to be the richest member of the State Duma in 2006 and was also involved in the money laundering case of the Tambov gang in Spain. Spanish investigators suspected him of having strong ties with the Gennady Petrov, who was considered the head of the Russian mafia there. In 2008, Spanish law enforcement searched Reznik’s villa in Mallorca, which was not indicated in his income statement. The then-Speaker of the State Duma Gryzlov called the investigation against Reznik “an attempt to denigrate the whole Russia”. The protocol of the preliminary investigation mentioned that “Diana Gindin, Reznik’s wife, is involved in making important decisions and in executing important economic operations for the criminal gang”. The following year, a Spanish judge Baltasar Garzón, interrogated Luis Rodriguez Pueyo, who stated that in April 2008 he attempted to kidnap the son of billionaire Francisco Hernando on the order of Reznik. Allegedly, the reason for the order was the refusal of the billionaire to return a large sum to the leader of the Tambov gang, Petrov. The Spanish court suddenly issued, and also suddenly canceled the arrest warrant for Reznik. A few years later, in 2016, Reznik was put on the international wanted list by Spain on charges of involvement in the Tambov gang and money laundering. However, two months later, the Spanish court again canceled the arrest warrant for Reznik. In 2018, the Spanish prosecutor's office investigated the Reznik case and demanded five and a half years of imprisonment for him and a fine of €100 million, but this time the court acquitted Reznik again. In April 2018, the United States imposed sanctions on him and 23 other Russian nationals.

Reznik owns shares and interests in several Russian companies, as well as land and real estate in Russia, Spain, and the United States. Officially, Reznik has about 20 land plots, mostly large agricultural plots, and he is also a champion among Duma members in the number of luxury cars.

From Interpol to the Duma: Meet Vladislav Reznik, Russia’s Only ‘Independent’ Deputy