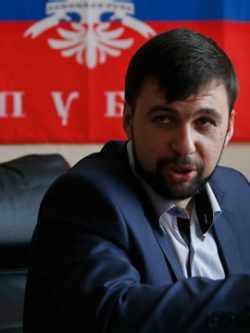 Head of the puppet administration of the “Donetsk People’s Republic”

PUSHILIN, Denis Vladimirovich (b. 1981) worked as a sales manager in the 2000s and from 2011 to 2013, he worked for a Russian Ponzi scheme company MMM and was a member of the movement and a party of the same name. He failed to win a seat in the 15 December 2013 repeat election of the 2012 Ukrainian parliamentary election, getting only 0.08% of the votes.

On April 5, 2014, he became deputy head of the pro-Russian militants Pavel Gubarev and then led a rally in Donetsk. On April 7 Pushilin became one of the leaders of the provisional government of the self-proclaimed “Donetsk People’s Republic” (DPR). On 19 May 2014, Pushilin became the self-declared Chairman of the Supreme Soviet (Speaker of parliament). On 31 August 2018, DPR leader Alexander Zakharchenko was killed by a bomb in a restaurant in Donetsk. On 7 September 2018, Pushilin was appointed acting head of the DPR.

Denis Pushilin is included in the sanctions lists of the EU, USA, Canada, Australia, Switzerland, Liechtenstein, and Norway. Sanctions include a ban on entry and freezing of assets in these countries.

Denis Pushilin is involved in the numerous killings of civilians in eastern Ukraine, the organization of terrorist attacks, the crash of a Malaysian passenger plane, which killed 298 people. Ukraine recognizes DNR and LNR as terrorist organizations.