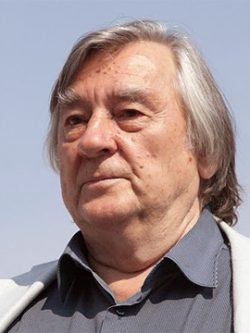 Editor-in-chief of the Zavtra (Tomorrow) newspaper

PROKHANOV, Alexader Andreyevich (b. 1938 in Tbilisi) graduated from the Moscow Aviation Institute in 1960. He has been engaged in literary work since 1959. In 1968, he became a journalist for the Literary Newspaper, which was considered “liberal” by Soviet standards, but not in covering foreign policy issues. So, from 1970, Prokhanov was a correspondent for the newspaper in the countries that the USSR had made or planned to make its satellites: Afghanistan, Nicaragua, Angola, Cambodia, etc. Since 1986, it has also been published in the ultra-conservative magazines The Young Guard and Our Contemporary. In 1989–1991, he was the chief editor of the Soviet Literature magazine and a member of the editorial board of the Soviet Warrior journal.

In December 1990, he created and became the editor-in-chief of the pro-imperial and communist-revanchist Den (Day) newspaper, later renamed to Zavra (Tomorrow). In 1991, Prokhanov was a confidant of Russia's presidential candidate, the radical expansionist Albert Makashov; in the same year, he supported the failed coup by the Emergency Committee.

Noteworthy that Prokhanov began his current service to the Putin regime not immediately. So in 2002, he could still be considered an oppositionist, albeit of an ultranationalist, imperial type. That year, he published the novel Mr. Hexogen. The main idea of the work was that a series of explosions of residential buildings in Moscow and other Russian cities in the summer-fall of 1999 (including the failed explosion of a residential building in Ryazan) was carried out by Russian state security services to establish Putin’s power in the country. The Russian liberal opposition adhered to a similar view (and still adheres to it), though the official investigation of the causes of these explosions satisfied only the requests of the authorities themselves.

However, starting in 2008, Prokhanov quite clearly follows the pro-Putin stance, criticizing the regime only for “minor shortcomings.” Here is his quote from an interview with Komsomolskaya Pravda in 2009: “...I am not a supporter of freedom, I am a counter-liberal and I know that any modernization in the world, including the American one, was carried out with the suppression of freedom and with the concentration of power. Putin created the vertical for modernization, for concentration. Putin created this new state, unlike Yeltsin, who allowed eerie competition between the regions: “Grab sovereignty as much as you want.”

Prokhanov was not only a supporter of the colonial and brutal Second Chechen War but also the wars waged by the Putin regime in the territories of neighboring states. So, in August 2008, during the Russian military aggression against Georgia, Prokhanov said on air of the Echo of Moscow radio station: “This was the first war of the fifth empire. It was an imperial war. The Russian Empire, as well as the Soviet Empire, is not an empire of capture, enslavement, exhaustion of resources, not like the Anglo-Saxons. This is a security war. In this case, we fought against the creation in our south of a powerful NATO fist. Georgia, with its anti-Russian establishment, with its president who hates us, is ready to provide all Georgian resources: ports, roads, routes under NATO weapons, this is a mortal enemy for Russia.”

NATO troops advancing on the “Russian Empire” seem to be everywhere to Alexander Prokhanov, this is an integral part of his biography. As you might guess, he and his newspaper supported the second foreign policy aggression of the Putin regime, the annexation of Crimea in March 2014. This is what he said on March 11, 2015: “For Russia, it would be a colossal catastrophe if the huge powerful consolidated Russophobic state would send its energies to the destruction of Russia, and the 6th American fleet would be based in Sevastopol... The instant accession of Crimea was a breakdown of this super-operation. The wall that Russia set up before this fierce NATO wave... This mystery, the mystery of the connection between Crimea and Russia, still amazes my imagination. I even thought that it was not Russia that annexed Crimea, but Crimea that annexed Russia... This is a miracle that happened a year ago, now you have to pay for it. Russian people must confirm that they deserve this miracle, that this is not a wallet that they accidentally found on the road. And that’s all that’s happening in Novorossiya now, it’s proof that we are ready to pay for this Crimean miracle.”

As you might guess, Prokhanov just as ardently supported the hybrid aggression of Russia against Ukraine in the Donbas that immediately followed the annexation of Crimea. In 2015, he published a new novel celebrating the “exploits” of the Donbas, Killing Cities, about the “atrocities” of the Ukrainian army (a year later he published another similar book, “Novorossiya Washed With Blood”). Again, with overwhelming imagination and self-confidence, speaking on behalf of all Russians, Prokhanov then declared: “For the Russians living here, in our homeland, in Russia, the betrayal of Novorossiya will become a gigantic moral tragedy. After reuniting with Crimea, the Russians felt themselves to be such a flourishing, history-making people. All this can again curl up, stall, die. The Russians have already survived the depression of the retreat of the 1990s. And if this is repeated in an even more terrible version, then no anti-crisis measures that the government is now taking, no hopes for modernization will help. Therefore, nothing like this will happen.”

The communist patriot of his former Soviet homeland, Prokhanov, now never forgets about the imperial Orthodox metaphysics, glorifying the war crimes of the Putin regime: “There is historical consciousness, and there is religious consciousness. And religious consciousness now coincides with history, introducing religious components into historical reasoning. The religious component is the category of a miracle, a Russian miracle. Russian history without a miracle category would be incomprehensible. We had to die a thousand times, they left us no chance to survive. But every time we laid our heads on the chopping block and an ax was already drifting over Russia, a miracle happened, and again we climbed out of the black hole and won. After the drama of '91, when Russia was reared, we rose. And now there is an increase, the ascent of the Russian State. It cannot be stopped by the laws of our Russian development. We are now going to sunrise, to the zenith, and not to sunset, not to fall. Therefore, religious consciousness believes in Russia as a miracle, and it tells us: Novorossiya will not be surrendered. Russia in this clash of worlds, which is happening now, will stand and win.”

However, Prokhanov’s flirting with the Orthodox officialdom looks comical and is not supported by the Orthodox officials themselves. So, at the meeting of the pro-Kremlin Union of Russian Writers in Belgorod in 2015, he organized a presentation of the “Orthodox icon” depicting Stalin. The Soviet dictator, beloved Prokhanov, who virtually beheaded the Russian Church, partially reestablished it in 1943 already under the complete control of the Soviet Party apparatus and state security services under a new name, the Russian Orthodox Church of the Moscow Patriarchate. The press service of the Belgorod diocese had to distance itself from Prokhanov:
“On May 14, a plenum of the Union of Writers of Russia took place within the Belgorod Metropolis, attended by writer, publicist and public figure Alexander Prokhanov. Alexander Andreyevich introduced an image of Generalissimo Stalin, surrounded by military leaders, which many immediately called the “icon.” And although the picture was written in the icon-painting style, nevertheless for several reasons it cannot be considered an icon. Firstly, none of the historical characters depicted on it are ranked by the Russian Orthodox Church as saints. Secondly, some of those depicted in this painting were outspoken persecutors of the Church. The painting is a kind of manifesto and illustration of the ideas of the so-called civil religion, which contradicts the Orthodox Church.”

It is no secret that Prokhanov slanders his ideological opponents who opposed Russian aggression in Ukraine. So, the Prokhanov article Singers and Crawlers, published in the pro-Kremlin Izvestia newspaper on August 18, 2014, contained allegations that Andrei Makarevich gave a concert in Sloviansk in the Ukrainian military unit, thereby “inspiring the military to kill civilians” in Donbas. However, Makarevich, according to eyewitnesses, performed at a refugee camp in Svyatogorsk. The musician then demanded to refute false information, as well as to recover a million rubles in compensation. Interestingly, Makarevich partially won the trial court, having seized half of the requested amount, but later the Moscow City Court overturned the decision of the district court.

Prokhanov (one of the very few Russian citizens) did not disdain to receive the award from the North Korean dictator Kim Jong-un in 2016, and also, of course, the award from Putin’s hands, the medal “For the Liberation of Crimea and Sevastopol” in 2014. He is a participant in many television and radio broadcasts, including openly propaganda ones. Since 2013, he has been one of the hosts of the Replika program on the Rossiya-24 state TV channel.

- Broad propaganda support for the criminal foreign and domestic policies of the Putin regime for at least the last 15 years on the pages of the Zavtra newspaper headed by him and in a huge number of other, much more influential media, including radio stations and television channels, where he was invited as a guest or an expert. In particular, we are talking about Prokhanov’s support for the war in Chechnya, aggression against Georgia in 2008, the annexation of Crimea in 2014, and the hybrid war of Russia in the Donbas.

- Actively promoting the idea of reconstructing the USSR under the auspices of the new “Russian Empire,” that is, questioning the sovereignty of a half dozen independent countries, including the Russian Federation itself, existing since 1991 and recognized by the world community as independent states.

- The propaganda of aggressive war (carried out, in particular, on the Rossiya-24 state TV channel), formally prohibited even by current Russian laws.