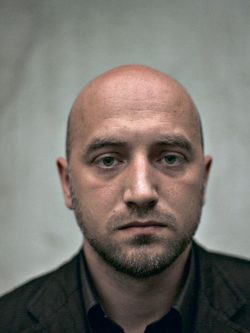 Writer, member of the Public Council under the Ministry of Culture of the Russian Federation

PRILEPIN, Zakhar Nikolayevich (b. 1975) over the years, was an op-ed columnist in the Russian media, including the magazines Story and Ogonyok, newspapers Novaya Gazeta, Izvestia, and others. On July 1, 2012, together with Sergey Shargunov, he headed the editorial board of the Svobodnaya Pressa website. In 2014, after the Crimean crisis, Prilepin changed his attitude to the current Russian regime. In an interview dated October 1, 2014, he declared a “personal armistice” and the absence of “the slightest motivation for confrontation.” He motivated this position by the changes taking place in Russia, about which he wrote and dreamed since the mid-1990s.

In 2014, Zakhar Prilepin took part in the armed conflict in eastern Ukraine. Since December 2015, Prilepin has been an adviser to the head of the Donetsk People’s Republic, Alexander Zakharchenko. Since October 2016, he has been deputy commander of a special forces battalion of the DPR army; in November 2016, he was promoted to the rank of major. From January 2016 to June 2017, he was the host of the program “Tea with Zakhar” on Tsargrad TV. Since November 10, 2017, he has been the host of the program “Zakhar Prilepin. Russian lessons” on NTV.

In the fall of 2017, he participated in the presidential primaries of the Left Front but lost to Pavel Grudinin. On November 29, 2018, he joined the All-Russian Popular Front. On October 29, 2019, he created the public movement Za Pravdu (For the Truth), which was considered a project of the Presidential Administration. On February 1, 2020, he created and headed a party of the same name. On January 15, 2020, he was included in a working group to prepare proposals for amendments to Russia's Constitution, which cleared the way for Putin to stay in power up to 2036.

Personal complicity in aggression against Ukraine; organization and financing of terrorist activities; active propaganda of Stalinism, xenophobia, anti-Semitism, incitement to hatred and hostility; complicity in raider seizure of property in the occupied Ukrainian territories.

In 2014, Prilepin radically changed his political position, moving from harsh criticism of the political regime established by Putin to his support. The writer explained the reason for the abrupt change in attitudes by the president’s foreign policy, namely, the annexation of Crimea to the Russian Federation. Since the beginning of active military operations of the Russian Federation against Ukraine, Zakhar Prilepin has taken a tough pro-government stance, publicly supporting and justifying Russia's external expansion: “The fact that Ukraine is forever, and complicated relations are forever, is just normal (...) That territory, which can be called Donbas, or Novorossiya, or whatever you like, as it exists in this context does not belong to Ukraine in fact, and it won’t change. Ukraine needs to say goodbye to this territory.” “I wholeheartedly support the struggle of Donbas for independence and I am well aware that it will never return to Ukraine.”

In his public speeches, Prilepin openly talked about plans for the actual dismemberment of Ukraine. Several publications called him the author of the Malorossiya project, which implies the unification of the Donetsk People’s Republic, the Luhansk People’s Republic and everything that “was formerly Ukraine” into a state entity separate from Ukraine.

Prilepin actively assisted in the process of the secession of the Ukrainian territories by the Russian Federation by accepting appointments in the administration and army of the DPR separatist military forces. So, in 2016, Zakhar Prilepin became the advisor to the president of the “Donetsk People's Republic” Alexander Zakharchenko. Then, in 2017, Prilepin became deputy commander of a special forces battalion. According to the writer himself, his responsibilities included not only educational work with the military but also direct participation in hostilities in the occupied Ukrainian territories. In an interview with Andrei Pivovarov, Zakhar Prilepin admitted his involvement in the massacres of the Ukrainian population: “Just by the performance... barely anyone could compete with my battalion. It’s just what we did, the complete outrage that we did… Whatever they say, but I ran a fighting unit that killed people. In large quantities”.

Besides the direct participation in hostilities in Ukraine, Prilepin provided material equipment for military units. From the writer's statements it follows that during humanitarian missions carried out with the donations of his fans, part of the funds was used to purchase ammunition and equipment for the separatist troops in Donbas. The organization, financing, and leadership of military units, qualified by independent experts as gangs in the territory of a sovereign state, is subject to the criminal law of both countries. So, in 2017, the Security Service of Ukraine (SBU) opened a criminal case against him under Articles 1 of 258-3 and 258-5 of the Criminal Code of Ukraine for organizing and financing terrorist activities.

In 2018, on the appeals of the SBU and the National Security and Defense Council of Ukraine, the Ministry of Culture of Ukraine included a Russian writer on the blacklist of persons posing a threat to the country's national security. Active participation in military aggression against Ukraine also served as a reason for breaking a contract between Prilepin and the Wiedling Literary Agency, which represented him on the international market.

According to the Novaya Gazeta report, the appointments of Zakhar Prilepin and his scandalous statements were caused by the need to replenish the pro-Russian separatist army due to the catastrophic shortage of volunteer conscripts. According to independent experts, one of the main tasks of Prilepin was the ideological support of the military company of the Russian Federation in Ukraine.

In 2018, Zakhar Prilepin became a member of the All-Russian Popular Front Movement, an umbrella organization supporting Vladimir Putin. He explained the move by the need for “a political roof” and expressed regret that other National-Bolsheviks did not follow his example. In 2017, Zakhar Prilepin spoke out in support of the military operations of the Russian Federation in Syria. Besides the active support of military companies in Ukraine and Syria, Prilepin became one of the constituent elements of the mass propaganda mechanism built by the Russian official authorities to misinform the population and escalate public hysteria. TV shows hosted by the writer are characterized by pronounced anti-democratic rhetoric and are a biased propaganda product.

Prilepin is one of the compilers of the so-called “Top 100 Russophobes” list, published on the Tsargrad website on 12/25/16. The list includes 100 public, political and cultural figures of the Russian Federation and abroad (originally: “A rating of the 100 most fierce Russophobes, both from the fifth column inside the country and from among foreign haters”), the statements of which he recognized as not patriotic or critical to domestic/foreign policy of the Russian leadership. In 2012, Prilepin’s article, “A Letter to Comrade Stalin,” published on the Svobodnaya Pressa website, provoked a sharp public reaction. The statements in the text expressed xenophobia, anti-Semitism, and Stalinism. The Moscow Bureau of Human Rights described the essence of the article by Zakhar Prilepin: “(...) Prilepin published the article “Letter to Comrade Stalin,” where he reproduced anti-Semitic accusations that the Jews allegedly benefited the most from the transition to a market economy.”

According to the media, Zakhar Prilepin’s career can be explained not only by the socio-political situation but also by family ties in the Kremlin. Vladislav Surkov’s cousin was married to Prilepin’s sister Elena. Due to the abovementioned facts, we can conclude that Zakhar Prilepin is a direct accomplice in establishing a personal dictatorship regime in the Russian Federation, which undermined the constitutional foundations of the Russian Federation and effectively abolished the rights and freedoms of citizens. The writer's activities contribute to the planting of an atmosphere of hostility and hatred, the spread of anti-Semitism, Stalinism, xenophobia under the guise of patriotic ideas, and serves as a source of receiving titles, posts, and financial well-being.