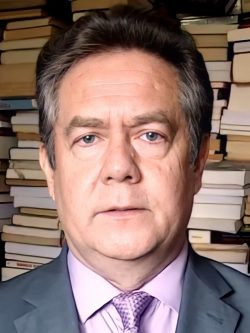 Soviet and Russian diplomat, historian and political scientist, public and political figure. Doctor of History, Associate Professor, Head of the Department of International Relations and Diplomacy, Moscow University for the Humanities. Guilt: “'I don't want war' — that's what people who are shaking for their own skin say. There have always been wars, and there always will be. We are talking about the liquidation of the Nazi hearth".

Public support for Russian military aggression against Ukraine. Nikolay Platoshkin is included in the report "1500 warmongers" compiled by the Free Russia Forum. The report contains the names of Russian public figures, military commanders, members of the parliament, propagandists, artists and athletes who have publicly spoken out in support of Putin's aggression or are directly involved in it. The Free Russia Forum is seeking sanctions against them in the European Union.