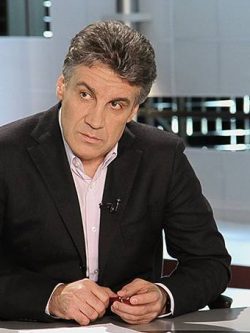 PIMANOV, Alexey Viktorovich (b. 1962) is a director, producer, screenwriter, journalist, TV presenter, and politician. President of the Managing Organization “Creative Association Red Star” since October 2013. Since 1997, he has been the host of the TV program Man and the Law on ORT and Channel One. In 1996–2010, he was the General Director of Ostankino TV and Radio Company (formerly RTS), a producer of a few programs for Channel One. Alexey Pimanov is banned from entering Ukraine due to his promotion of the war against Ukraine.

Alexey Pimanov is the director and producer of the propaganda film Crimea, which justified and glorified the Russian occupation of Ukraine’s autonomous republic.

On October 4, 2013, the bloody events of January 13, 1991, in Vilnius were distorted and deceitfully presented in Alexey Pimanov’s program Man and the Law. The attack of the Soviet army and special forces, as a result of which 14 were killed and more than 1000 civilians in Lithuania were injured, was denied. Pimanov led the blame on the Lithuanians themselves.