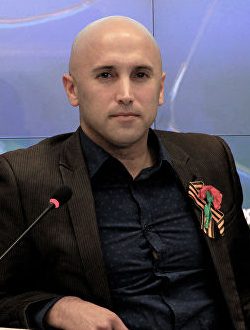 GRAHAM, Phillips (b. 1979) is a British blogger, an employee of the Russian propaganda TV channels. Born in Nottingham, he graduated from the University of Dundee. Until 2010, he was a clerk at the Central Information Bureau in London, where, along with 700 other employees, he reviewed government websites and prepared reports for the Parliament. Since 2009, Phillips began visiting Ukraine as a football fan, and a year later he moved to Kyiv (later to Odesa), where he taught English. Besides, he worked as a freelancer, columnist, special correspondent, and photographer. He wrote for his blog Brit in Ukraine, mostly describing his visits to Ukrainian nightclubs and brothels. After a failure to publish some investigations and his disappointment with the Euromaidan protests, he was hired by RT in December 2013.

Active participation in propaganda projects of the Putin regime, justification of terrorism, participation in illegal armed groups in Eastern Ukraine, misuse of a journalist status, production of fake news, numerous provocations in Ukraine, Russia and the EU.

In early March 2014, he went to cover the “status referendum” in Crimea. As an RT streamer and a YouTube blogger, he repeatedly called the Ukrainian side “fascists” and “Kyiv junta” which coincided with the points of the Russian state media. A month later, Phillips went to Donbas on an assignment from RT to cover the invasion of pro-Russian armed forces from a point of view complementary to the Kremlin. OFCOM, the UK broadcast regulator, found him guilty of biased coverage of the Ukrainian crisis. Some of his actions were too provocative even for RT. In May 2014, he lied that Ukrainian soldiers shot at him. The video he produced turned out to be such a poor fabrication that RT had to disavow the statements of its freelancer.

On May 20, 2014, Ukrainian armed forces detained him at a checkpoint while he was trying to leave Mariupol to the terrorist-controlled Sloviansk. Ukrainian authorities charged him with spying but released him two days later. In July 2014, he returned to the war zone in Eastern Ukraine, where he was detained once again. On July 25, the Ukrainian Security Service deported him “with a three-year ban on entry in the interests of ensuring state security, sovereignty, and territorial integrity”. Despite RT's direct ban on returning to Ukraine, in August he showed up in Luhansk.

Turning out to be a too toxic asset for RT, Phillips began collaborating with LifeNews and the Russian Defense Ministry TV channel Zvezda, propaganda media that never even claimed to be objective and consistent with journalistic standards. In particular, they used his report on MH17 and interviews with “witnesses” he found, who stated that they had seen a Malaysian Boeing shot down by Ukrainian fighters on July 17, 2014. Throughout 2014-2017, he several times posed in the uniform of the militants of the unrecognized “republics” of Eastern Ukraine. The fact, according to international law, gives the right to consider him a combatant of these illegal armed groups. The British secret services were also interested in his activities and in 2015 interrogated him on suspicion of terrorism. In December 2017, the Security Service of Ukraine declared a lifelong ban on entry into Ukraine for Phillips.

Mostly, Graham Phillips is known for his provocative behavior and aggressive harassment of captured Ukrainian military. Soon after the capture of Debaltseve, Phillips questioned Ukrainian prisoners of war who were carrying their dead and wounded comrades. Phillips followed and constantly asked them: “Do you feel ashamed?” On September 17, 2016, during the release of Ukrainian soldier Volodymyr Zhemchugov from the captivity, Phillips attacked him with insults, calling him “zombie”, asking “Who did brainwash you?” and “Who needs you now, armless?”. Note that Zhemchugov lost his hands and eyesight after being trapped by pro-Russian militants. OSCE Media Representative Dunja Mijatović called Phillips' behavior a despicable and shameful act. The same month, he tried to provoke Ukrainian guards on the border with the occupied Crimea. He interrogated people heading to Crimea whether Crimea was Russian and shouted the same to the Ukrainian border guards.

The geography of his provocative activities is not limited to Ukraine. In September 2015, he staged a conflict at an opposition rally in Moscow, advocating for the military aggression against Ukraine. In August 2016, he burst into the Correctiv Berlin investigative journalism bureau, demanding a meeting with Markus Bensmann, who investigated the downing of MH17 in Eastern Ukraine in 2014. At the same time, Phillips shouted “Lügenpresse!”, “Why are you lying?”, conducted unauthorized filming and refused to leave the room. In January 2018, he showed up for the “Voter Strike” opposition rally in Moscow. There, he insulted the participants and called them “a bunch of traitors and morons”. In August 2018, he tried to disrupt the exhibition at the Georgian Embassy in London, dedicated to the anniversary of the Russian invasion in 2008; in October, he desecrated the grave of Stepan Bandera in Munich; and in November, he tried to provoke the Ukrainian ambassador to Austria into a fight.