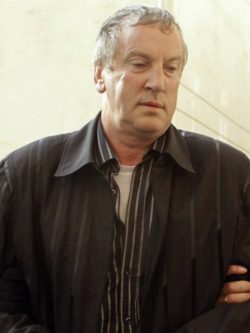 PETROV, Gennady Vasilyevich (b. 1947) is one of the leaders of the Tambov-Malyshev criminal group that had close relationships with Vladimir Putin and his associates in the 1990s. Born in Leningrad, he was involved in criminal activities in the Soviet times and allegedly was a KGB informant. In the 1980s, he met with Alexander Malyshev, at that time already a well-known criminal leader, a member of the Tambov group. Petrov became an active member of the Malyshev organized crime group and Malyshev’s right hand since the split of the Tambov group in the late 1980s.

In 1992, Petrov created Petroleum Financial Company with his partner Igor Naivalt. In 2 years he registered the Baltic Construction Company (BSK), one of the largest investment and construction companies in today’s Russia, together with Vladimir Putin’s cousin nephew Mikhail Shelomov. Soon, he became one of the shareholders of the Rossiya bank. This bank became known as a platform that brought together many friends and partners of the future President Putin. Petrov not only regularly met them at the Board of Directors but also lived in the same apartment building. In 1994, he was arrested on suspicion of organizing a criminal community, racketeering, and extortion, but the case soon fell apart.

In 1996, when the Sobchak-Putin team lost the election in Saint Petersburg, Gennady Petrov moved to Spain along with other leaders of the Malyshev gang. In 1997, the Organized Crime Unit of the Marbella Commissariat launched an investigation into money laundering through their Hisparus company. In June 2008, 20 Russians were detained in Spain, including Petrov on charges of money laundering, arms trafficking, contract killings, extortion, drug trafficking, forgery, cobalt, and tobacco smuggling. Soon, Gennady Petrov was released by a Spanish court on bail of 600 thousand euros and is currently hiding in Russia.

Gennady Petrov stands out among other mafia leaders by his closeness to the inner circle of Vladimir Putin and the Russian president himself. He established friendly relations with the St. Petersburg city administration in the early 1990s. During telephone conversations intercepted by the Spanish police, Petrov repeatedly mentioned that he keeps contacts with a certain influential person who he called “The Upper” or “Tsar”. Juan Untoria, the lawyer of the “Russian mafia” once let slip that Gennady Petrov was “Putin’s friend”.

In 2008, the Spanish Prosecutor’s Office, together with the Spanish Civil Guard, arrested Gennady Petrov, who has been living in Marbella since 1997, on charges of money laundering. According to the investigation, Petrov’s criminal gang laundered money through companies specially created for this purpose, having acquired property in Spain worth more than 50 million euros. Petrov’s indictment includes a number of senior officials of the Russian Federation, in particular former Defense Minister Anatoly Serdyukov, Deputy Prime Minister Dmitry Kozak, former communications minister Leonid Reiman, State Duma member Vladislav Reznik, deputy head of the Federal Drug Control Service Nikolay Aulov, chairman of the Investigative Committee Alexander Bastrykin and his former deputy Igor Sobolevsky.

Gennady Petrov was released by a Spanish court on bail of 600 thousand euros and is currently hiding in Russia. The investigating authorities of the Russian Federation have repeatedly refused to extradite Petrov to Spain. Returning to Russia, Petrov settled in a house on the Berezovaya Alley in St. Petersburg. Since 2003, Vladimir Putin’s judo friend Vasily Shestakov, co-owner of Rossiya Bank Nikolai Shamalov, Putin’s close associates Arkady Rotenberg, Yuri Kovalchuk, and Viktor Myachin, and some other influential people own the apartments in this house.

Gennady Petrov is an important link in the chain of the mafia, secret services and the crony oligarchy that rules modern Russia. The intercepted phone calls showed that he oversaw appointments in the Russian government. It is very unlikely that Putin was not aware of this. The companies associated with Petrov and his accomplices repeatedly overestimated prices for reselling each other real estate in Spain, thereby legalizing criminal profits. There is a real reason to believe that this was one of the ways to fill the offshore wallets of Putin’s inner circle.

Gangsters of the Mediterranean

THE FATE OF THE TAMBOVSKAYA & MALYSHEVSKAYA CRIMINAL GANGS IN SPAIN