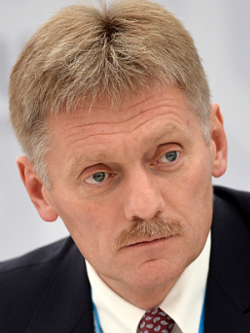 Press secretary of Vladimir Putin, Deputy Chief of Staff of the Presidential Executive Office of Russia (2012 - to date)

PESKOV, Dmitry Sergeyevich (b. 1967) is a Russian diplomat and the Press Secretary for the President of Russia, Vladimir Putin. Born in Moscow in a Soviet nomenklatura family (his father was a Soviet ambassador to Pakistan), he graduated from the Institute of Asian and African Countries at the Moscow State University in 1989. He served as a diplomat in Turkey and at the central office of the Ministry of Foreign Affairs in Moscow. In 2000, he joined the press service of the President of Russia. He also was Putin’s spokesperson when Putin was Prime Minister in 2008-2012 and was named the presidential spokesperson again in 2012. He holds the post of the Deputy Chief of Staff of the Presidential Executive Office of Russia (Presidential Administration).

Being the main official mouthpiece of the Putin regime.

Dmitry Peskov is not just Putin’s spokesperson but he is often considered a senior member of the Putin government and his close associate. Working first in the press service of the President, and then as the press secretary of Vladimir Putin, Peskov invariably supported all the actions of the Russian authorities both domestically and internationally, justifying repression, suppression of the opposition, destruction of democratic institutions in Russia, and aggressive foreign policy.

Peskov’s defense of the Putin regime sometimes led to public scandals when his harsh statements became public. For example, Peskov’s statement about the opposition rally on May 6, 2012, at the Bolotnaya Square when protesters clashed with the police as a result of a police provocation caused widespread public outcry. Peskov said that law enforcement agencies should act harder, and “for a wounded riot police officer, the protesters’ liver must be smeared on the asphalt.”

Dmitry Peskov had to advocate for the ruling regime in the most delicate situations. In 2006, it was Peskov who reported a message stating that the Russian authorities had no relation to the death of the former security officer, Alexander Litvinenko, who died on November 23, 2006, after being poisoned with radioactive polonium-210. Peskov said, “It is impossible to imagine that the Russian government could stand behind the murder,” and also that “this murder is a clear provocation to discredit the government of Vladimir Putin.” A similar position shared other representatives of the Russian authorities, including Sergey Lebedev, director of the Foreign Intelligence Service (SVR). However, on January 21, 2016, Judge Robert Owen in the High Court of London announced a verdict indicating the “likely involvement” of Putin in the murder of Litvinenko. As a spokesman for Vladimir Putin, Peskov has repeatedly spoken out in support of the annexation of Crimea.