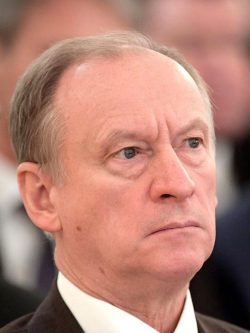 Director of the Federal Security Service (FSB) of Russia (1999–2008), Secretary of the Security Council of Russia (incumbent)

PATRUSHEV, Nikolai Platonovich (b.1951) is a current Secretary of the Security Council of Russia. Born in Leningrad, he graduated from Leningrad Shipbuilding Institute in 1974. In 1975, he was recruited by the KGB. He attended intelligence and security courses at the KGB School in Minsk, and later at the Higher School of the KGB in Moscow. At the same time, he served as a KGB security officer in Leningrad, becoming the head of its anti-smuggling and anti-corruption unit. There, he became a close friend of Vladimir Putin. From 1992 to 1994 he was Minister of Security of the Republic of Karelia. In 1995, he became deputy chief of the FSB's Organization and Inspection Department. His career skyrocketed when Putin became the Director of the FSB. In April 1999, he became FSB First Deputy Director. In August the same year, President Boris Yeltsin promoted him to Director, replacing Vladimir Putin, a newly appointed Prime Minister. In 2008, Patrushev has become Secretary of the Security Council of Russia, a consultative body that works out President’s decisions on national security affairs.

Nikolai Patrushev is a close associate of Vladimir Putin and is among his most trusted representatives. Under the leadership of Patrushev, the FSB has become one of the main punitive bodies of the Putin regime. FSB, led by Patrushev, launched an attack on human rights and freedoms in the Russian Federation. FSB officers helped Putin to concentrate power, destroy political competition in the country, free media, independent parties, and public associations. They continue to carry out political persecution of dissidents, opposition and civil activists.

The beginning of Patrushev’s service as the head of the FSB was marked by the apartment bombings in Russia, which allegedly were carried out by the FSB officers. Patrushev was appointed the director of the FSB on August 9, 1999, and in September 1999 a series of terrorist attacks took place in Moscow, Buinaksk, and Volgodonsk. As a result of the apartment bombings, 307 people died, more than 1,700 were injured of varying severity. According to the official version, the attacks were organized by “Chechen separatists.” However, after residents of an apartment building in Ryazan found sugar bags in the basement of the building, which allegedly contained RDX, the intelligence agencies claimed that the incident was “just a drill”. Serious suspicions arose in the society that the FSB was the real organizer of the attacks. These attacks that led to the outbreak of the Second Chechen War became an important part of the transfer of power to Vladimir Putin.

After the election of Vladimir Putin to the presidency, Patrushev led the Federal Security Service in Russia, turning it into an effective tool of the Putin regime, both at home and abroad. The United Kingdom public inquiry into the 2006 poisoning of FSB whistleblower Alexander Litvinenko found that “the FSB operation to kill Mr. Litvinenko was probably approved by Mr. Patrushev and also by President Putin.” In 2008, during the so-called “five-day war” between Russia and Georgia, Patrushev fully supported Russian aggression against Georgia as a Secretary of the Security Council of the Russian Federation. In 2014, leading the Russian Security Council, Patrushev was involved in the organization of the annexation of the Crimea and the outbreak of war in the South-East of Ukraine. Following the annexation of Crimea, Nikolai Patrushev was placed on the European Union's sanctions list. In April 2018, the United States imposed sanctions on him and 23 other Russian nationals. After the failed coup d'état plot in Montenegro the October 2016, Patrushev was cited by experts as the Kremlin's point man for the Balkans, indicating Russia′s increasingly hardline approach to the region.

Do the Western Balkans face a coming Russian storm?