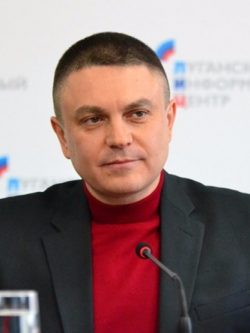 The head of the pro-Russian administration LPR, operating in the occupied part of the Luhansk region in Ukraine (2017 - to date)

PASECHNIK, Leonid Ivanovich (b. 1970) has been the head of the self-proclaimed “Luhansk People’s Republic” since 2018. Leonid Pasechnik worked in the Security Service of Ukraine (SBU) as the head of the anti-smuggling division of the main K department of the SBU in the Luhansk region, and the head of the Stakhanov interdistrict department. In 2014, he joined the Russia-led insurgent military groups. In August 2014, he headed the Ministry of State Security of the breakaway region. Presumably, according to Ukrainian sources, the Federal Security Service (FSB) of Russia recruited him back in 2006.

Pasechnik involved in numerous killings of civilians and violation of the territorial integrity of Ukraine. He is responsible for torture, organizing terrorist attacks and other large-scale violations of internationally recognized human rights in the occupied territories of Ukraine.