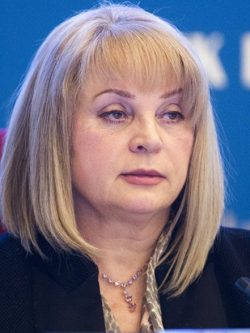 PAMFILOVA, Ella Aleksandrovna (b.1953) is the current chair of the Central Election Commission of the Russian Federation. She began her career at the factory as a Komsomol and Communist Party functionary. In 1989, she was elected to the Supreme Council of the Soviet Union. In November 1991, President Yeltsin appointed her the Minister of Social Protection. Throughout the 90s, she was a member of the State Duma. In 2000 she took part in the presidential elections. From 2004 to 2010, she was the head of the Commission on Human Rights under President Vladimir Putin. In early March 2016, Putin delegated Pamfilova to the Central Election Commission, and she was elected the Chairman a few weeks later.

Ella Pamfilova belongs to a cohort of Putin’s officials who have a democratic background but have become embedded in the ruling structures of the Russian Federation. They serve the purpose of imitating democracy within the system, as well as neutralizing public protest against a strengthening dictatorship. Heading the Central Election Commission, Pamfilova took responsibility for the ongoing election fraud, the prohibition of independent candidates from participating in the elections and other unlawful actions carried out by her subordinates.

Her chairmanship of the Central Election Commission began with open election fraud in the parliamentary elections in 2016, and, in 2017, she made a politically motivated decision to refuse to register one of the opposition leaders, Alexei Navalny, as a candidate for the presidential election. Ella Pamfilova’s deliberate efforts to repress the opposition were on clear display during recent elections to the Moscow City Duma in 2019. The district election commissions deliberately and in violation of the law rejected the registration of opposition candidates who had a real chance of winning. A series of meetings between the unregistered candidates and Ella Pamfilova yielded no results. The situation spurred a wave of mass protests in Moscow that was brutally suppressed by the city police and the National Guard.

Ella Pamfilova organized presidential elections in illegally occupied Crimea in 2018 and participated in the “Taurida 2014” propaganda forum in Crimea in 2014.