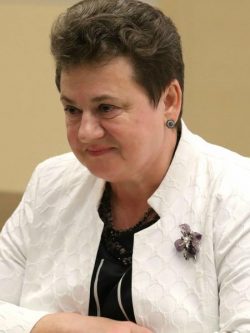 ORLOVA, Svetlana Yuryevna (b. 1954 in Oblucye, Jewish Autonomous Oblast) is a corrupt Russian politician. She graduated from the Ussuriysk State Pedagogical Institute with a degree in philology in 1977, after which she worked as an educator in a boarding school in Vladivostok. Soon, however, she preferred a career in the Communist party. From 1979 to 1990, she worked in several district committees of the Communist party in Vladivostok. With the collapse of the communist system, she caught the wind of change, and in 1990 headed the Primorsky regional women's commercial organization ANNA, which opened educational and tourist enterprises. In 1991, she simultaneously graduated from the Khabarovsk Higher Communist Party School and the courses of women entrepreneurs at the Academy of National Economy in Moscow.

The energetic Svetlana Orlova is a typical example of the so-called Soviet-style “strong manager” with inherent rudeness, unscrupulousness, arrogance towards the taxable population and pathetic servility to senior officials. She worked all her life in administrative and representative positions, and most of all she loves holding power. As former senator Konstantin Dobrynin said, “Orlova was known in the Federation Council as a “clapper.” She always clapped a lot, passionately, but most importantly, she always started clapping first. The secret was simple: when the president was about to finish his thought, she already raised her elbows to the level of her chest, spread her arms and began to clap her hands. Even beat her hands rather than just clap. Sometimes accompanying it with loud cries of “Bravo!” or “True!” from a place. The most important thing was to be noticed. And the president noticed her.”

Both local and federal media regularly pointed to the mass of unfulfilled promises by Orlova, and she invariably reacted sharply to such accusations. So, contrary to her promises and despite the protests of residents and environmentalists, she approved the construction of a plant processing Moscow waste in the Vladimir region. Besides, she was caught lying about building schools and relocating residents from emergency housing. When reports about the problems in one of the poorest regions of Central Russia reached the federal authorities and they unobtrusively chided her, she criticized the local media and activists, calling them “Bandera henchmen” (referring to a leader of the Ukrainian national liberation movement in the mid-20th century).

Svetlana Orlova and her inner circle got involved in several corruption scandals. Her son, an employee of the Department of Economic Security of the Ministry of Internal Affairs of the Russian Federation, Vladimir Orlov together with his colleagues, had been literally robbing entrepreneurs and resold their stuff for several years. In 2013, they became defendants in a criminal case. Then a group of security officials illegally detained 10 trucks with coffee belonging to a Lithuanian businessman. The policemen blackmailed the businessman, demanding $250,000 for the return of the cargo, and when he refused to pay, they fabricated a criminal case and put him in jail for three years. Despite the publication of records of the negotiations of criminals, which repeatedly mentioned the name of Orlov as the organizer of this “eventб” the governor’s son was not punished. According to media reports, in early 2016, Vladimir Orlov, who was already at that time the Deputy Director of Mosvodokanal with a monthly salary of half a million rubles, was detained for drug trafficking.

In 2017, the Deputy Governor of the Vladimir Region, Elena Mazanko, was detained on suspicion of receiving a bribe of 3 million rubles. According to investigators, Mazanko took money from Kemerovo contractors for concluding government contracts with them worth tens of millions of rubles. Svetlana Orlova called the criminal prosecution of her deputy a “provocation.” At the end of 2018, investigators opened a second criminal case against Mazanko, accusing her of corruption and abuse of power.

Orlova herself, thanks to her desperate loyalty, remained untouchable for criminal prosecution. The oligarch Mikhail Prokhorov, being the leader of the Civic Platform party, accused Orlova of removing a candidate from the Civic Platform, Alexander Filippov, from the gubernatorial elections in 2013, and in initiating a criminal case against Filippov's father. The businessman claimed that Orlova lobbied for the registration of the Civic Position, a spoiler party similar in name and symbolics to the Civil Platform, as well as the nomination of Filippov’s namesake from this party.

The quarrelsome temper, indifference to the problems of the region and the obsessive self-promotion gave her an impressive anti-rating. In September 2018, even with powerful administrative support, she lost the gubernatorial elections to an absolutely controllable, no-name candidate. The federal authorities, nevertheless, sweetened her bitterness from a shameful defeat, finding her a job in the Accounts Chamber. Orlova gained fame for her excessive fawning but she is not an exception, but rather a typical example among officials at various levels in Russia. Such “strong managers” are of value only for the unpunished robbery and duping of the country's citizens. Russia will become free only if it liberates itself from such statespersons.