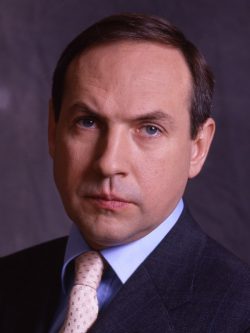 Member of the State Duma of Russia, Member of the Presidium of the General Council of the United Russia Party, Chairman of the Board of the Russkiy Mir Foundation, Dean of the Faculty of Public Administration of Moscow State University

NIKONOV, Vyacheslav Alekseyevich (b. 1956 in Moscow) is a Russian politician. He was born into a high-ranking Soviet nomenklatura family. He was a son of an NKVD officer, professor of MGIMO, editor of the “Communist” journal, and a grandson of Vyacheslav Molotov, Soviet foreign minister under Joseph Stalin, who took part in the mass repressions. Vyacheslav graduated from the Faculty of History of the Moscow State University in 1978. He started his career at his alma mater. During his studies, he was the secretary of the Komsomol Committee of Moscow State University, then the secretary of the faculty committee of the Communist party. In 1981 and 1989, he defended his kandidat and doctoral papers on the history of the Republican Party of the United States.

In 1989-1991, he was an instructor, the head of a sector of the Central Committee of the Communist party, advisor and assistant to the Chief of Staff of the President of the USSR. From August 1991 to January 1992, he served as an assistant to the Chairman of the KGB. In 1993, he headed the Politika Foundation and got elected to the State Duma of Russia. In 1996, he was a Deputy Chairman of the Coordination Committee of the support of Boris Yeltsin in the presidential elections. Between 2005 and 2007, he was a Member of the Public Chamber of the Russian Federation, Chairman of the Commission on International Cooperation. Since 2007, Nikonov has been the Executive Director, and since 2011, the Chairman of the Board of the Russkiy Mir (Russian World) Foundation. Since 2011, he has been Dean of the Faculty of Public Administration of Moscow State University. Starting from 2018, he has been hosting the Big Game political talk-show on Channel One together with Dimitri Simes (USA).

Active long-term complicity in the legitimization and propaganda of the Putin regime, as well as in the direct implementation of the maleficent policy of the Russian leadership.

.Vyacheslav Nikonov is one of the ideologists and executors of a large-scale project of the so-called hybrid war unleashed by Russia against independent Ukraine. For many years, he has been consistently making a significant contribution to this wrongful activity in several fields in all his posts: as a propagandist on the federal TV channels, as one of the heads of the ruling party and the largest state university and an executive of several pseudo-public organizations.

From the very moment of its creation in 2007, Nikonov has been managing the Russkiy Mir Foundation (appointed by the decree of Vladimir Putin), an organization with an impressive budget designed to ensure Russian influence abroad by regulating Russian-speaking communities and “soft power” strategies. Speaking at a meeting on the foundation’s tenth anniversary, Nikonov said that “the biggest reward for me was the inclusion by the European Parliament of the Russkiy Mir Foundation on the “honorable” list of the most malicious enemies,” and said that this happened because “the Russian world offered an alternative to values which the West preaches, which is why it is perceived as the number one enemy.”

Nikonov openly stated his position and role in the implementation of Russia's aggressive foreign policy in numerous public statements. In May 2014, speaking at the Petersburg Dialogue forum organized by the Russkiy Mir Foundation, Nikonov said, “For Russia, what happened in Ukraine is an unconstitutional armed coup organized by the United States as a realization of its geopolitical goals. European countries are their support group. For Russia, this is not a political challenge, but an existential one. The current government in Kyiv is illegitimate, and all its actions are unconstitutional. The Nazis are in power in Kyiv, and the Ukrainian intelligence services are under the operational control of the CIA... The result of the elections in Ukraine could be another Maidan with a very high probability of secession in the South-East of Ukraine. The vast majority of Russians in these regions see no reason to remain part of such a Ukraine.”

In March 2015, at the opening of the Russian Crimea exhibition at the State Duma, Nikonov said, “We all watched a film in which Vladimir Vladimirovich Putin talked about how this truly historic great event of our history happened... Is it really us? Yes, it’s we, it’s you who were able to do this: without a single shot to solve the most difficult geopolitical task... The State Duma worked in such a regime... in a month we were able to essentially integrate Crimea legislatively into the Russian Federation.”

In March 2019, celebrating the fifth anniversary of the annexation of Crimea at a conference at the Crimean University, Nikonov recalled his direct active participation in the implementation of this special operation and its subsequent legitimation. “We were aware that from that day, Crimea is a full-fledged subject of the Russian Federation... We had a whole bunch of problems that needed to be solved urgently. All the employees of our committee worked two weeks without sleep and rest to prepare and pass through all stages of adoption a bill that regulates these issues and gives us time to solve the most acute problems.”