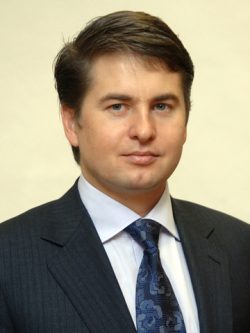 NEMERYUK, Alexey Alexeyevich (b. 1975 in Vladikavkaz) graduated from MGIMO with a degree in management in 1996, and a year later received a diploma from the Higher School of International Business of the Academy of National Economy and Public Administration. These years, he took part in the commercial activities of his father, the owner of Alan-Z, a car service company also involved in the storage of petroleum products. Reportedly, the company had close ties to the Khimki organized crime group and Alexei Nemeryuk Jr.’s appointment to the post of deputy head of the Kryukovo district in 2003 was due to the assistance of mafia bosses. In 2004, he became the deputy prefect of the Zelenograd administrative district of Moscow.

He stayed as deputy prefect until 2012, when, by an order of the Moscow Mayor on April 20, 2012, he was appointed the head of the Moscow Trade and Services Department. There, Nemeryuk initiated a large-scale demolition of trade stalls in the city in 2016, a highly controversial move that had corruption signs. On June 14, 2017, Alexei Nemeryuk became the Minister of the Government of Moscow and the head of the Department of Trade and Services in the city of Moscow. In February 2019, he was appointed First Deputy Chief of Staff of the Mayor and the Government of Moscow. Alexei Nemeryuk was one of the main curators of the scandalous election to the Moscow City Duma in 2019.

Corruption, ties to organized crime, complicity in usurping power in the capital.

It is no coincidence that Aleksey Nemeryuk holds his position, and he is not good at hiding his corruption-criminal ties. He got involved in a series of corruption moves: the large-scale demolition of small trade objects in Moscow (“night of long buckets”) by replacing them with other objects organized by the city hall, endless costly festivals and fairs in the city, access to which is also controlled by the city hall, and also the organization and holding of scandalous elections to the Moscow City Duma, in which the majority of independent candidates were not allowed to run. A man with a dubious reputation and ties was very useful for retaining power in the capital by the Putin and Sobyanin nomenclature.

Back in the 1990s, the Nemeryuk clan had ties to the Khimki gang. The wife of Alexey’s brother, Nikita, Anna Kondratieva, the daughter of a major federal official, owned the Vesta Group company together with gang member Dmitry Katerny, the alleged organizer of Russia's first murder of State Duma member Andrei Aizderdzis. The case was never investigated because, as reported, the gang had common business with the Khimki police department. It is also noteworthy that at a time when Nemeryuk Jr. was deputy prefect of Zelenograd the company of his father, Alan-Z, received state orders from the prefecture of Zelenograd for the supply of official cars. In 2009, his father was murdered as a result of a gang war.

Before being appointed to the city hall, Alexey Nemeryuk managed to defend his doctoral thesis on youth organizations in Russia at the Department of History of the Military University. However, as it turned out, his thesis almost entirely, by 93%, consists of “incorrect borrowings” without reference to sources. Nemeryuk borrowed whole paragraphs and even articles.

Having become an employee of the city hall, he continued to do business, being one of the founders of Alan-Z, which contradicted the law on state civil service. Only in 2016, after the appeal of the Yabloko party, his name disappeared from the Unified State Register of Legal Entities. However, that did not mean that he had stopped lobbying his business, taking advantage of his position as an official. Earlier that year, the name of the official surfaced again in connection with the demolition of the Moscow trade stalls. In the winter of 2016, more than a hundred retail outlets in the capital were all at once recognized as objects of unauthorized construction and demolished in one night. In August, the second wave of demolition took place. In place of the old stalls, however, new ones began to appear soon, belonging to firms affiliated with Moscow officials, including Alan-Z.

Nemeryuk has a corruption interest in the funeral business. In the spring of 2016, a former employee of the Ritual State Funeral Enterprise published a letter. According to him, the department of Nemeryuk, placing tenders in the ritual services, repeatedly violated the rules of tenders and gave contracts to a certain circle of contractors. The letter also revealed the shadow prices of this market, for example, the price of a plot at the Troekurovsky cemetery was 10 million rubles, while it was possible to buy it only through the director of the Ritual, Yekimov, who coordinated the matter with Nemeryuk or his deputy Ivan Zubtsov.

The Kremlin's dissatisfaction with the partial success of the opposition in the municipal elections in Moscow in 2017 was the reason for the reshuffle in the Moscow government. Having taken the post of Minister and then Deputy Head of the Mayor’s Office, Nemeryuk set about organizing the elections to the Moscow City Duma. Even though the majority of independent candidates were not allowed to participate in the elections allegedly due to direct Kremlin’s will, the office of Nemeryuk exerted pressure on the city election commissions, and also distracted Muscovites from protests by organizing fairs and festivals in the days of mass opposition rallies.

Nemeryuk is not the only example of a criminal-power alliance in the Moscow government and the country’s leadership. Such ties are not only not something reprehensible for the Russian authorities, but, on the contrary, serves as a marker of social closeness and inclusion in the common circle of responsibility. It seems that only the exclusion of the root rods of this system from power will serve as an impetus for the transformation of Russia into a modern democratic state.