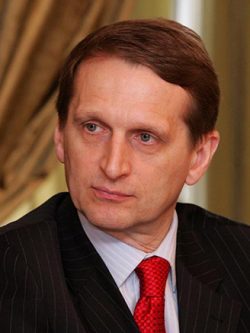 Director of the Foreign Intelligence Service of Russia (2016 - to date)

Complicity in the unconstitutional coup and usurpation of power, repressive law-making, complicity in international crimes, such as the annexation of Crimea and unleashing the war in eastern Ukraine.

Sergey Naryshkin is one of the key figures of the Putin regime. For many years, he has been working in various positions in the government system of Russia, invariably supporting Vladimir Putin’s policy aimed at eliminating civil rights and freedoms, destroying democratic institutions, suppressing the opposition, international aggression, and isolating Russia from the world community.

Sergey Naryshkin manifested the vividly destructive nature of his activities during his work as chairman of the State Duma (2011-2016). The legality of the Duma he headed was compromised by large-scale frauds during the elections which led to serious street protests. Naryshkin organized its work in such a way that soon the lower house of the Russian parliament became known as “the crazy printer.” Such an unpleasant epithet appeared when in a short time it adopted a large number of repressive bills and legislations.

Here are just a few laws adopted by the State Duma of the 6th convocation under the leadership of Sergey Naryshkin. At the end of December 2012, the Duma adopted the so-called Dima Yakovlev law, named after the boy who died in a foster family in the United States. This bill established a ban on the adoption of Russian orphans by Americans, thereby depriving many orphans of the opportunity to find a family and get a decent standard of living in a foster family in the United States. In response to criticism of the law, Vladimir Putin replied: “There are probably many places in the world where the standard of living is better than ours. So what, we will send all the children there? Maybe we’ll move there ourselves?”

In the same year, the State Duma adopted a bill on the blacklist of Internet sites. It provided for the creation of a unified registry of Internet sites (domain names, network addresses, site page pointers) containing prohibited information, as well as mechanisms to restrict access to them. Due to the sloppiness of the wording, even Wikipedia was blocked for some time. The Russian authorities got a tool to shut down opposition websites and independent media, such as Kasparov.ru, Grani.ru, Rufabula.com, and many others.

In response to the mass protests that happened in the Russian cities after the elections to the State Duma, the parliamentarians decided to legislatively limit the rights and freedoms of citizens. In June 2012, they passed a bill that tightened penalties for rally organizers and participants. It increased maximum fines from 5 thousand to 1.5 million rubles.

Two years later, the restrictions became tighter. The new article 212.1 of the Criminal Code of the Russian Federation imposed imprisonment of up to five years for repeated violation of the procedure for holding mass assemblies. Since then, several people were prosecuted, including civil activist Ildar Dadin, who was sent to a penal colony for participating in peaceful pickets and tortured there.

On March 20, 2014, the State Duma ratified the agreement on the accession of Crimea to Russia, thereby legally formalizing the annexation of the peninsula. The consequences of the annexation of Crimea affected the position of Russia in the world and the lives of Russian citizens themselves. The international community did not recognize this step, Russia found itself in international isolation, many countries have imposed sanctions against Russia. In response to the sanctions, the Russian authorities imposed counter-sanctions. All this ultimately led to a decrease in the standard of living of Russian citizens. As a result of the 2014 Crimean crisis, the federal government of the United States under Barack Obama blacklisted Naryshkin and other close friends of the Russian president.

Already at the close of the work of the State Duma of the 6th convocation, in June 2016, the members of the Duma adopted the so-called “anti-terrorist package” of bills developed by Irina Yarovaya and Viktor Ozerov, popularly called the Yarovaya package or the Yarovaya Law. The Yarovaya Package introduced imprisonment of up to one year for “failure to report a crime” and up to 10 years for incitement to riots, reduction of the age of criminal prosecution to 14 years in cases of terrorism, and tightening of control over correspondence. Moreover, the Yarovaya Package introduced strict state regulation the activities of religious associations in Russia, thereby violating the principle of religious freedom established by the Constitution of the Russian Federation.