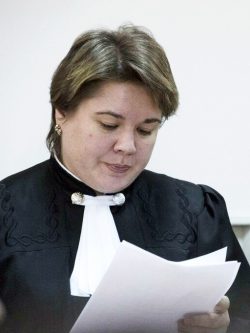 Judge of the Moscow City Court

MUSHNIKOVA, Natalya Yevgenyevna (b. 1973) is a member of the judges’ panel of the criminal court of appeal of the Moscow City Court. Previously, she had served as the Chairman of the Basmanny District Court of Moscow.

In 2011, Hermitage Capital included her in the list of those who “denied justice to Sergei Magnitsky’s mother,” because she twice denied the complaints of her lawyer about access to the archives for medical research into Sergei’s death in Butyrka jail and about concealment of the materials of the official investigation from relatives by separating a case against the Butyrka medical personnel.

She sanctioned and extended the arrest of the Bolotnaya political prisoners Richard Sobolev, Alexander Kamensky, Yaroslav Belousov, Fedor Bakhov, Denis Lutskevich, Nikolai Kavkazsky, Andrei Barabanov, Konstantin Lebedev, Alexander Margolin, Ilya Gushchin, Dmitry Rukavishnikov, and Alexei Gaskarov. In 2013, she authorized the seizure of the money of Sergei Udaltsov, who was illegally accused of preparing for the riots. On October 11, 2013, she ruled in absentia to arrest Anastasia Rybachenko, a defendant in the Bolotnaya Square case.

In 2013, she prolonged the arrest of the elected ex-mayor of Yaroslavl Yevgeny Urlashov.

In 2015, she extended the arrest of a captured Ukrainian officer Nadezhda Savchenko.