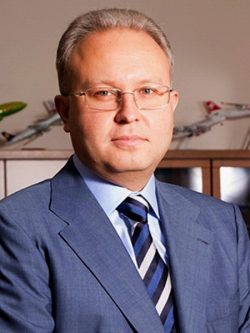 Chairman of the Management Board of the Federal Grid Company of the Unified Energy System, a member of the Board of Rosseti.

MUROV, Andrei Yevgenyevich (b. 1970 in Moscow) was born into a family of a KGB officer, Yevgeny Murov (later on a director of the Federal Protective Service of the Russian Federation from 2000 to 2016). In 1993, he graduated from the Law Faculty of St. Petersburg State University. From 1993 to 1996, he worked at the City Bar Association of St. Petersburg. From 1996 to 2000, he was Deputy General Director of ICN October. Until 2004, he worked as a manager in various telecommunications and construction companies. In 2004, he became First Deputy General Director of St. Petersburg Pulkovo Airport. From 2005 to 2012, he headed the airport.

Andrei Murov, the son of a long-standing acquaintance of Putin and the former head of his guard, belongs to the new generation of Russian kleptocrats. Once he has headed the major airport of Petersburg at the age of 34, he keeps occupying managerial positions, and each time he becomes involved in corruption scandals.

An audit of the reconstruction of the St. Petersburg airport, carried out in 2011 by the Accounts Chamber, revealed about a dozen violations in the work of the Pulkovo Airport. Thus, according to the Chamber’s report, Pulkovo Airport bought the technical services building with a 1.2-hectare land plot from Rossiya Airlines for 200 million rubles and leased it to Air Gate of the Northern Capital LLC (VVSS), although according to the agreement between the Petersburg government and VVSS, the land plot was to be bought by the city administration. Moreover, the airport, by agreement with the VVSS, was supposed to expose the concessionaire a penalty of 90 million rubles for delaying the conclusion of a contract with the general contractor for the construction of a new terminal but did not do this.

An audit of the Accounts Chamber of FGC and Rosseti in 2013 also revealed inappropriate spending of billions of rubles of budget funds and repeated overstatement of the cost of building facilities. At the same time, remuneration to members of the FGC management board in 2010-2013 increased almost three times to 505 million rubles, expenses of the office of the chairman of the management board of FGC UES increased by 45% to 452.5 million rubles. Besides, the Chamber noted that the business trips of company executives “have signs of a misappropriation.”

Thanks to the authority of the Federal Protective Service director Yevgeny Murov, his son’s company was chosen as the executor and operator of the project to build an energy bridge to the annexed Crimea. According to media reports, the cost of imported equipment for FGC UES exceeded its real price according to the customs declaration by 2–3 times, and a deliberately generated VAT was presented to the tax authorities for refund.