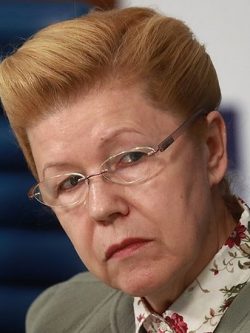 Member of the Federation Council of Russia (2015 - to date), a former member of the State Duma

MIZULINA, Elena Borisovna (b. 1954) graduated from Yaroslavl State University with a degree in Law in 1977. In 1977 - 1985, she worked as a consultant to the Yaroslavl regional court. In 1985 - 1990, she worked at the Yaroslavl State Pedagogical Institute. According to her then-husband, she got a job at this institute with his patronage (Mikhail Mizulin headed the ideological department of the Yaroslavl regional committee of the Communist Party). At first, Mizulina worked there as a senior researcher, then, in 1987, she became the head of the department of Russian history, having worked in this position for 3 years. Until the defeat of the August 1991 coup, she was a member of the Communist Party.

In 1993, Elena Mizulina started her career in politics. In December, he was elected to the Federation Council from Yegor Gaidar’s right-liberal Choice of Russia bloc. There, she became a chairman of a committee on constitutional legislation and judicial legal issues. However, in January 1996, she resigned as a member of the Federation Council due to her election as a member of the State Duma. She was nominated by the Yabloko party, which she joined in 1995. In that State Duma, Mizulina was the head of the committee on legislation and judicial reform, as well as the deputy chairman of the sub-committee on state-building and constitutional rights of citizens.

In 1999, Mizulina was re-elected to the State Duma from Yabloko, but in February 2001, she left this party and in June of the same year, joined the Union of Right Forces (SPS) party. Interestingly, Mizulina left Yabloko a year after the failure of this party, and she motivated it precisely by the fact that the Yabloko received only 5% of the mandates in the Third Duma. Noteworthy, that Mizulin would also leave the SPS shortly after this party failed to get to the Duma. In February 2004, Mizulina was appointed representative of the State Duma in the Constitutional Court of the Russian Federation after the Union of Right Forces, lost the elections. This happened after Putin called on “to use the personnel potential” of Yabloko and the Union of Right Forces that didn’t get into the 4th Duma in December 2003, apparently referring to the gradual integration of the most conformist representatives of these parties into the Kremlin’s “power vertical.”

In December 2007, Mizulina again ran for the State Duma. She decided to change the party again and entered Fair Russia (SR), which is completely loyal to the Kremlin and was created on the instructions of the Presidential Administration. From this moment, Mizulina ceases to be an opposition politician. In the Duma of 5th and 6th convocations, her influence on lawmaking has grown significantly, in particular, when she headed the committee on issues of the family, women, and children. Since Putin’s Russia began transforming from an authoritarian state into a totalitarian one, which controls not only the public but also the private lives of its citizens, this committee, before the annexation of Crimea, informally becomes the key one. Its chairman and members became the authors of the most draconian bills, elaborated, usually, with the support from the Kremlin.

So, Mizulina is a co-author of the notorious legislation of 2010 “On the protection of children from information harmful to their health and development” and the bill of 2012 that made tougher amendments to it (the last legislation was called the “Law on Internet Censorship” and the “Law on blacklists”). These bills opened an Overton window for the full-scale state regulation and censorship of the internet. Mizulina calls the critics of this legislation the “pedophile lobby.” However, she decided that these bills are not enough, and she proposed to consider the possibility of a legislative ban on services that allow bypassing site-blocking, to block user profiles in social media obscene language, and to include the “special role” of Orthodoxy in it the preamble of the Constitution of Russia.

The name of Mizulina has become a common name for the hypocritical sanctimony in Putin's Russia. Together with Pavel Astakhov, she started the “pedophilic hysteria” in Russia, which has already provoked a sharp increase in trumped-up criminal cases (including the repressions against the Karelian historian, the head of the local Memorial Center Yury Dmitriev). Another example of Mizulina's hypocrisy was her position on a ban on the adoption of Russian orphans by American families in 2012. At first, she was against this ban, but after a few days, she voted for it (Dima Yakovlev Law). In the same year, she received the Order of Honor from Putin.

The Concept of State Family Policy until 2025, proposed by Mizulina’s Committee in the summer of 2013, called for the actual abolition of the family legislation that exists in Russia, new prohibitions on abortion and divorce, the intervention of clergy in family affairs, and the establishment of a generally binding minimum of alimony. In 2013, she advocated the prohibition of surrogacy. In the summer of 2016, Mizulina advocated a ban on “baby boxes.” Elena Mizulina is a tough homophobe. She is the author of several bills to combat the so-called gay propaganda. She even criticized Vitaly Milonov’s bill that banned “gay propaganda on minors,” which she considered too soft. In 2013, she offered to punish not only “propaganda,” but even justification of homosexual and bisexual relationships, as well as transgenders. For example, she considers the statement that “gays are people too” as an “extremism,” and also calls for separating children from same-sex families.

When she was a member of the State Duma in March 2014, she actively supported the occupation and annexation of the Republic of Crimea by Russia. Due to that fact, she was included on the sanction lists of the United States, Canada, the EU, Australia, Switzerland, and Ukraine. Noteworthy, that, amid her constant anti-Western and homophobic rhetoric, her son and two grandchildren live in Brussels. Moreover, her son works as a lawyer at a company advocating for LGBTQ+ rights.

- Actively promoting Russian aggression against Ukraine and the occupation of Crimea.

- The creation of bills that violate human rights and the principle of equal rights of various social groups of citizens before the law and allow gross interference of the government in the private life of Russians, both adults and children.

- Actively promoting the introduction of censorship.

- Anti-constitutional activities to destroy the foundations of a secular state in Russia.

- Anti-constitutional activities to destroy the foundations of family legislation in Russia.

- The slander of their political opponents (as a rule, accusations of belonging to the “pedophile lobby”, etc.) and the demand for their criminal prosecution for expressed judgments.