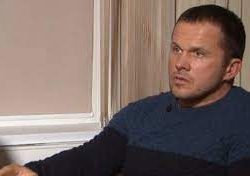 According to the authorities of the United States, Great Britain, and the European Union, Mishkin was born on July 13, 1979, in the village of Loyga or in Kotlas of the Arkhangelsk region. He lives in Moscow. According to investigative journalists, he studied at the Military Medical Academy. On December 19, 2018, the US Treasury Department put Mishkin on the sanctions list, identifying him with a man known as Alexander Petrov and accused by Britain of the attempted murder of Sergei and Yulia Skripal. On January 21, 2019, the European Union imposed personal sanctions against Mishkin (Petrov). As the reason for the imposition of the sanctions, the EU Council indicated the storage, transportation, and use of the Novichok poisonous substance on September 5, 2018, in Salisbury.

An Officer And A Diplomat: The Strange Case Of The GRU Spy With A Red Notice