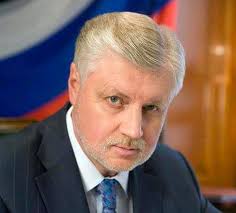 MIRONOV, Sergey Mikhailovich (b. 1953 in Pushkin) graduated from the Leningrad Mining Institute in 1980. As a student, he began working as a geophysicist specializing in uranium raw materials. From 1986 to 1991, he worked as a senior geophysicist in the Mongolian People's Republic, where he lived for 5 years before the collapse of the USSR. At that time, he began trading securities in Saint Petersburg. In 1994, he was elected to the Legislative Assembly of St. Petersburg. In 2000, he was the deputy head of the election campaign of Vladimir Putin for St. Petersburg in the 2000 presidential election. In June 2000, he was elected Deputy Chairman of the Legislative Assembly of St. Petersburg.

Sergey Mironov is the Chairman of the Supervisory Board of the Union of Russian Paratroopers and the President of the Federation of Sports Tourism of Russia. In March 2014, he was included in the sanctions lists of the European Union, USA, Canada, Australia, and Switzerland due to the Russian aggression against Ukraine and the annexation of Crimea. In September 2015, he was included in the sanctions list of Ukraine.

Complicity in the unconstitutional seizure and usurpation of power.

For many years, Sergey Mironov supported the policy of Vladimir Putin aimed at the destruction of democratic institutions, the suppression of the opposition, the elimination of free media, foreign policy aggression, and self-isolation of Russia.

During the 2018 presidential election, he was a member of the initiative group that nominated Vladimir Putin as a candidate for the president of the Russian Federation.