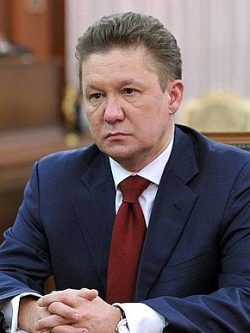 MILLER, Alexey Borisovich (b.1962) is the current CEO of Gazprom, a government-owned company and the world's biggest public energy supplier. Born in Leningrad, he graduated from the Leningrad Financial-Economic Institute in 1984. As a graduate student in the late 1980s, he participated in the “Young economists’ club” led by Anatoly Chubais. Thanks to him, in the early 1990s he began working at the External relations committee of the government of St.Petersburg. The chairman of the committee at that time was Vladimir Putin. Between 1996 and 1999 Miller was the Director for Development and Investment of JSC “Sea Port of St. Petersburg”. When Putin became president, Alexey Miller was appointed Deputy Minister of Energy of the Russian Federation. Since 2001, Miller has been the CEO of Gazprom and since 2002 he has been Deputy Chairman of the Board of Directors of Gazprom.

1. Corruption and ties to organized crime.
According to some evidence, in the mid-90s, Alexey Miller was Putin's deputy and his confidant, “watching” over industrial facilities, where the future president of Russia “had a stake”. Among the facilities Putin received money from were Petersburg Oil Terminal and the seaport. Seizures of these enterprises were carried out by gangster methods. Miller and Putin had close relationships with criminalized entrepreneurs Traber and Dyukov and mafia leaders Kumarin and Vasiliev. The group could have been involved in the murder of the vice-governor of St. Petersburg, Mikhail Manevich, who tried to maintain a 29% stake in OJSC Sea Port of St. Petersburg under city control.

2. Transformation of Gazprom into a personal company of Vladimir Putin.
Since his appointment as the Gazprom CEO, Miller has pursued a policy aimed at establishing full control over the company by the Kremlin and Putin personally. According to an independent expert report “Putin and Gazprom” by Boris Nemtsov and Vladimir Milov, Gazprom became the first business structure where Putin began to systematically place his people in key positions, in a short time ousting all representatives of the old management team. The top management of Gazprom very quickly turned out to be flooded with Putin’s old acquaintances from the St.Petersburg administration.

3. Using Gazprom as a tool of external aggression.
Having established full control over the company, the Kremlin began to actively use it as a powerful tool for promoting its foreign policy, in fact blackmailing European energy consumers. The so-called “gas wars” with Ukraine and the promotion of the Nord Stream-2 project, which makes Germany dependent on direct gas supplies from Russia, have become vivid manifestations of such a policy. It also helps to influence the German (and generally European) political elite. The implementation of the project can seriously hit Ukraine, which will lose its status as a transit country for Russian gas. Thus, the Putin regime will no longer fear for the safety of pipelines and will be ready to escalate violence in Ukraine.

In April 2018, the United States placed Miller on the list of Specially Designated Nationals (SDN) along with 23 other Russian nationals.

Why Gazprom Resembles a Crime Syndicate

The Nord Stream 2 gas pipeline is a Russian trap

Comment: Gazprom is not a market player, it’s a political weapon