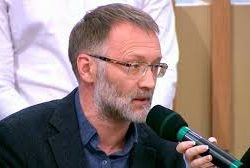 Russian propagandist, political scientist, radio and TV presenter, head of the advisory council under the head of the Russian occupational administration of Crimea.

Since May 2001, he has been a political observer for the Politkom.ru website. Since 2010, he has been the General Director of the Institute of the Caspian Cooperation. Since December 2015, he has also been the host of the Iron Logic program on Vesti FM radio station. He is a political observer for the Tsargrad-TV, and since November 2017, he was been hosting the program Mikheev.Results on this channel. Since January 2019, he was been co-hosting (together with Vladimir Solovyov and Vladimir Averin) a talk show Kto Protiv (“Who is against?”) on Russia-1 TV channel.

Active participation in aggressive state propaganda of the Putin regime. That includes the creation and dissemination of information in the interests of the political leadership of the Russian Federation that distorts reality, deceives people and instills aggression, an atmosphere of fear, hatred, xenophobia, and chauvinism. Sergei Mikheev specializes in fomenting anti-Western and anti-Ukrainian sentiments in society.

The basis of the accusation is the use of the status of an independent political scientist and expert as a cover for propaganda activities carried out within the framework of the so-called hybrid information warfare unleashed by the Kremlin. He is a regular participant in most propaganda programs and talk shows on major Russian television and radio networks.

Critics note his specific style, characterized by increased emotionality or even hysteria. However, he quite effectively plays the role of an authoritative and status expert for an uncritical audience, which interprets all events from a “state-patriotic” or “orthodox-Orthodox” position.

Sergei Mikheev: “I am a chauvinist, in this sense. I don’t believe in any special abilities of women, to be honest, in the political arena. I believe that a woman, getting into the world of male politics, becomes a man. And why do we need a man in a skirt if he is not a Scot?”

Mikheev not only adheres to anti-democratic views but also openly and aggressively preaches them in popular media. He is actively involved in the “expert design” of misinformation campaigns, carried out to distract the attention of the audience from real facts and the true culprits of aggressive and criminal acts (Russian aggression in southeastern Ukraine, the downing MH-17, etc.).

Sergei Mikheev: “It cannot be ruled out that the crash of the airliner was not an accident, but a completely deliberate provocation. The plane was shot down by the Ukrainian military on purpose, by order of the United States, this cannot be ruled out.”

Due to his position in Ukraine (public support for the occupation of Crimea, the unleashing and escalation of armed aggression in the southeastern regions of Ukraine) in the fall of 2014, he was declared persona non grata in the EU on the initiative of Lithuania.

Indirect evidence of Mikheyev’s complicity in the crimes of the Putin regime is his successful career at the leading propaganda TV channels. Starting with the role of a visiting expert, he very quickly became a host of talk shows and programs. Moreover, he combines work for the Russia-1 and Vesti-FM, which are part of the state media holding VGTRK, and for the private “conservative-monarchical” Tsargrad-TV, owned by an “Orthodox oligarch” Konstantin Malofeev.

In February 2019, Mikheev, trying to reproduce the provocative statement of his colleague Dmitry Kiselyov, who became famous for his phrase about Russia's ability to “turn the United States into radioactive ashes,” said on TV that the latest Russian Poseidon complex was able to “wash off New York.”

Mikheev is one of the active repeaters of the so-called manuals produced by the Kremlin propaganda department to ensure the uniformity and high intensity of the disinformation campaigns broadcasted through the media and Internet. For example, he always explains the civil protests in Russia exclusively by the “hand of the West.”

The high status of Mikheev as the propagandist is confirmed by his invitation as a lecturer to the events for the high military command of Russia.