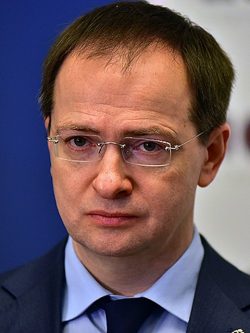 MEDINSKY, Vladimir Rostislavovich (b. 1970) is a controversial Russian Minister of Culture. Born in Ukraine into a Soviet officer’s family he spent his childhood in military garrisons. In 1987, he entered MGIMO's Faculty of International Journalism, where he was a member of the Komsomol organization and joined the Communist party. In 1991-1992, Medinsky completed an internship as an assistant spokesman for the USSR (then Russian) Embassy in the United States. In 1992, he graduated from the institute. In 1992, together with fellow students, he created the advertising and PR agency that worked with financial pyramids. In 1999, Medinsky got a Ph.D. in Political Science.

In 1998, Vladimir Medinsky became vice president of the Russian Association of Public Relations. Medinsky became a civil servant, first becoming a PR of the Federal Tax Police Service of Russia, Sergei Almazov, and then he headed the Information Policy Department of the Ministry of Taxes. In 1999, Medinsky worked at the election headquarters of the Fatherland-All Russia bloc. In December 2001, Medinsky joined the Unity and Fatherland-United Russia party. In 2004-2005 he was deputy head of the Central Executive Commission of the United Russia party. In December 2004, he was elected to the State Duma and became a member of the Bureau of the Supreme Council of the party. On May 21, 2012, Vladimir Medinsky was appointed Minister of Culture of the Russian Federation. In 2013, Vladimir Medinsky established and headed the Russian Military Historical Society. In 2015, Medinsky called President Putin “the absolute genius of modern real politics”.

Management of campaigns of state propaganda and myth-making, of the use of cultural and historical policies for the needs of strengthening the dictatorship and isolation of the country.

Vladimir Medinsky symbolizes the transformation of the Ministry of Culture into a propaganda office under Putin. Before taking up the post of minister, Medinsky became famous as a lobbyist of the gambling, tobacco, beer and advertising businesses in the State Duma, and as an author of a series of low-budget pseudo-historical books. In these books, he concentrated on debunking “Russophobic myths” and interpreting historical facts from a great-power, purely statist point of view. Medinsky transferred the idea of a universal “anti-Russian conspiracy”, popular among the modern Russian elite, to the events of the past. Many professional historians and critics accused Medinsky of bias and distortion of facts, and also suggested that Medinsky was not the real author of the books commissioned by the Kremlin. When he became a minister, he was suspected of plagiarism. In October 2017, the advisory board of the Higher Attestation Commission, having considered Medinsky’s Ph.D.thesis, recommended depriving him of a degree. However, the Minister of Education, Olga Vasilyeva, refused to do it.

Unquestioning loyalty to Putin’s narrative of “Russia as a besieged fortress” replaced Medinsky’s lack of historical education. In 2010, he became a member of the “Commission to Combat Attempts to Falsify History to the detriment of Russia's interests” by a presidential decree. Over the two years of its existence, this commission fought against the “myth” of the Holodomor, as well as tried to find an excuse for Stalin's policies during and after World War II. Also in 2011, Medinsky joined the board of the Russkiy Mir Foundation, which disseminates Putin's cultural and propaganda policy abroad. Medinsky supports the government’s attempts to censor the Internet and in 2015 he called for the creation of a Russian “patriotic Internet” to combat Western ideas, adding that those who are against Russia are against the truth.

Government intervention in the cultural sphere increased significantly under Minister Medinsky. He advocates protectionist measures in movie-making and theater and believes that the state is obliged not only to subsidize culture but also to monitor its content. In 2014 the Ministry of Culture refused to sponsor the international documentary festival “Artdocfest” due to the disagreement of the festival’s president, director Vitaliy Mansky, with Russian interference in Ukraine’s internal politics, the annexation of Crimea and a propaganda campaign against Ukraine. In December of the same year, Medinsky announced that the ministry would not fund films critical of the government. In 2018, at the initiative of Medinsky, the Ministry of Culture revoked the rental certificate for the satirical movie “The Death of Stalin”.

Medinsky dismissed Grigory Revzin, manager of the Russian pavilion at the Venice Biennale for criticizing Vladimir Putin’s anti-Ukrainian policies. Medinsky publicly criticized the director Kirill Serebrennikov for his intention to make a film about Pyotr Tchaikovsky, in which he would mention the composer's homosexuality. In 2015, Medinsky started a conflict with the director of the State Archives of the Russian Federation, professor Sergei Mironenko, because the latter called the Soviet myth of Panfilov's 28 Guardsmen what it is — a myth. Shortly, Mironenko was dismissed. In the fall of the following year, after the premiere of the movie “Panfilov's 28 Men” which was sponsored by the Ministry of Culture, Medinsky sharply responded to skeptics. He called them “utter scum”, which cast doubt on the “holy legend” of Panfilov's 28 Guardsmen since, according to the minister, it is “a symbol of the heroism of the people”, even though that it was a fiction of a Soviet journalist. His intention to whitewash Bolshevism, and, in particular, Stalinism, is not a secret. In 2015, he introduced the exhibition “Romantic Realism. Soviet painting of 1925-1945”, showing the official art of the Stalin era, depicting “happy people in a prosperous country”. He promotes the exhibitions of Alexander Gerasimov, a portrait painter of Stalin, and Helium Korzhev, a belligerent communist.