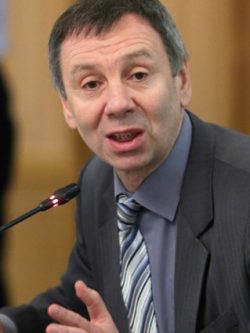 Director-General of the Institute for Political Studies

MARKOV, Sergei Alexandrovich (b. 1958 in Dubna) is a Russian propagandist, political scientist, director-general of the Institute for Political Studies, member of the Public Chamber of the Russian Federation, member of the Council on Foreign and Defense Policy, confidant of Vladimir Putin as a candidate for President of the Russian Federation. He graduated from the Faculty of Philosophy of Moscow State University in 1986. From 1989, he worked at the Faculty of Philosophy of MSU, and then at the Faculty of Political Science. Between 1990 and 1999, he was a senior fellow at the National Democratic Institute. In 1994–1997, he worked at the Carnegie Endowment Moscow Center.

Active participation in aggressive propaganda of the Putin regime, that is, in the creation and dissemination of information in the interests of the political leadership of the Russian Federation that intentionally distorts reality, deceives people and instills aggression, an atmosphere of fear, hatred, xenophobia, and chauvinism.

Sergei Markov specializes in fomenting anti-Western and anti-Ukrainian sentiments in society. The basis of the accusation is the use of the status of an independent political scientist and expert as a cover for propaganda activities carried out within the framework of the so-called hybrid information warfare unleashed by the Kremlin.

Markov is a regular participant in most propaganda programs and talk shows on major Russian television and radio networks. Critics note his specific style, characterized by excessive emotionality, giving him an image of a pro-Putin fanatic. He has been caught many times in outright lies and the dissemination of conspiracy theories (in particular regarding the Boeing MH17 crash). However, for a non-critical audience, he plays the role of a respected expert very effectively who interprets all events from a “state-patriotic” position. It is no coincidence that he becomes the leader of the Medialogy rating as the most frequently quoted Russian political expert by foreign media, even though his own YouTube channel has only a few dozen subscribers and hundreds of views.

Markov is known for his radically anti-Western and anti-Ukrainian statements. He talks about Ukraine as a dependent, puppet regime, supposedly absolutely undemocratic and completely controlled from the United States. Thus, commenting on the results of the 2015 elections, he said: “There are thousands of political prisoners in the country, there are no free media, tens of thousands of politically active citizens were forced to flee the country from repression. As a result, the Ukrainian election is free competition between slaves and criminals of the Maidan regime, as well as those who are trying to adapt and survive and advance through the ranks in the repressive system.”

As a member of the State Duma, he was a co-author of amendments to the “Law on rallies,” sharply restricting the freedom of peaceful assembly and demonstration.

During the mass civil protest against rigged elections of 2011-2012, he actively spread the lie that all the protest actions in Russia were allegedly funded by Western intelligence agencies. Sergei Markov is one of the most consistent and active creators and broadcasters of the propaganda myth of the “threat of the Russian Maidan.” Accordingly, he is one of the main whistleblowers and fighters with the key actors in this myth, the Russian “Western liberals,” the “fifth column,” “enemies of the people and state,” as well as Western governments and special services, the main purpose of whom, according to this myth, is to weaken and destroy Russian statehood.

Testimony of Sergei Markov: “[Organizers of the Russian Maidan] are the special services of the USA and Great Britain, first of all... They are opposed by powerful Russian special services, the majority of the people of Russia, and, in the end, by the historical experience, everyone understands that if you make the Maidan, as in Ukraine, there will be a catastrophe in the country.” Markov is a representative of “hawks” among state-patriotic “political scientists.” His statements are almost always extremely aggressive and warlike.

Testimony of Sergei Markov: “This is a war that has been unleashed to bring Russia to its knees, to displace the political regime and ensure the intensive looting of our country's resources. Sanctions will continue until we win this war. And then the question arises, what does winning mean? It is necessary to inflict unacceptable damage on them. Only when Russia learns to react in this way, the threat of sanctions decreases for us.”

Almost all of Markov’s statements are based on propaganda patterns created back in the USSR, which use juggling, outright lies, speculation and conspiracy theories.

Testimony of Sergei Markov: “The goal is global: the Russian people must leave the world history arena. To do this, it must be dismembered, deprived of the power, which is statehood, and subordinated as weaker. It is also important to remove the Russian Orthodox Church from the world stage as one of the spiritual foundations of the Russian people, minimize the number of Russian-speaking citizens, tell them: you are not Russians, you are Latvians, you are Ukrainians, Belarusians... The people of southern Russia should be convinced that they are not Russians, but Cossacks, to the people of northern Russia - that they are Pomors, the people of Siberia - that they are Siberians, oppressed by Russian imperialism.”

He is one of the regular lecturers and propagandists at the youth camps, organized by the pro-Kremlin pseudo-public structures such as the Young Guard of United Russia, Nashi, and others.