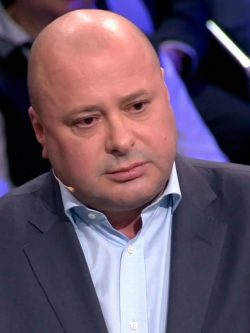 MARKELOV, Mikhail Yuryevich (b. 1966 in Moscow) worked as a junior editor of Mayak radio station from 1986 to 1987, and from 1989, as a correspondent of Mayak radio station. In the same year, he entered the journalism department of Moscow State University but did not complete his studies, which, however, did not prevent his career take-off. In 1990, Mikhail Markelov became the author and correspondent of the Vzglyad program. For seven years, from 1994 to 2001, Mikhail Markelov was the author and presenter of the program Sovershenno Sekretno (Top Secret). While working on TV, he regularly visited conflict zones in the CIS and the Middle East. From May 2001 to August 2006, he was the author and host of the TV program “Our version. Under the Secret label” on TVC.

Back in 1992, he met a budding politician Dmitry Rogozin. In 2004, Rogozin invited Markelov to run for the State Duma from the newly created national-patriotic party, Rodina. From July 24, 2004, to December 2007, Markelov was a member of the State Duma. In the Duma, he became a member of the Fair Russia-Motherland faction. In June 2010, Markelov left Fair Russia and in the next election in 2011, he was nominated from the list of United Russia, becoming a member of the Duma committee on ethnic affairs. By that time, Markelov’s views had undergone significant changes, he became one of the most ardent advocates of the notorious 282 article of the Criminal Code (hate speech) and an adversary of Russian nationalists.

Currently (2020), he is an adviser to the head of the United Russia faction in the State Duma. Mikhail Markelov is the brother of a famous Russian lawyer Stanislav Markelov, who was murdered in Moscow with a journalist Anastasia Baburova.

Mikhail Markelov is an example of a professional defector who can easily change his beliefs to stay afloat in the system. Even after the murder of his younger brother, Stanislav, in 2009, he worried not about finding the real culprits for the death of a loved one (Stanislav Markelov was killed by members of a radical right-wing group that had ties to the Presidential Administration), but that this tragedy could cause damage to the ruling regime. From the pages of pro-Kremlin media, he claimed that the murder of his brother could be used to “organize protests and even a coup attempt.”

Having become a United Russia member, Markelov began to express himself more sharply and became famous for public denunciations. In June 2012, he wrote on his Twitter that “Not the nationalists, but the Nazis are trying to get to the Presidential Council! If Demushkin [one of the leaders of Russian nationalists] joins the council, I will create a committee to shoot out the Nazis.” In 2013, he demanded to institute criminal proceedings against the founder of the VKontakte social network Pavel Durov for extremism and support for the opposition. He called for toughening legislation on “hate speech” directed against individuals and groups, as well as against the entire state, regardless of intent. In 2015, Markelov demanded a toughening of the sentence to Alexei Navalny and his brother in the Yves Rocher case, which the ECHR recognized as unfounded and arbitrary.

With the beginning of the Kremlin’s armed intervention in Ukraine, Markelov turned into an “expert” on Ukraine on numerous propaganda talk shows on Russian TV networks. He invariably follows the Kremlin narrative of the “Kyiv fascist junta” and the “American threat.” In 2015, his candidacy was considered for the position of curator of the Kremlin’s interaction with the self-proclaimed “republics” of Donbas in the Presidential Administration, but this decision was never made.

Such people as Mikhail Markelov, demonstrate the face of the minions of the Russian government. Deprived of principles and moral guidelines, they perfectly exist in the political establishment of the Russian Federation, poisoning political life and civil dialogue. The example of a United Russia member, political scammer, and propagandist Markelov confirms the need for lustration after the change of political regime in Russia, which will push such individuals to the sidelines of public life and bring them to account for many years of destructive activity.