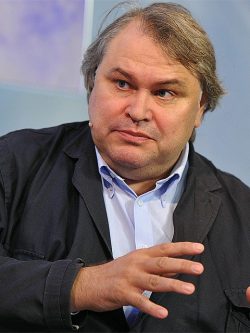 MAMONTOV, Arkady Viktorovich (b. 1962 in Leningrad) is a Russian propagandist, TV host, author of documentaries, head of “The author's program of Arkady Mamontov” studio on the Rossiya-1 TV channel since 2000. He graduated from the philological faculty of Moscow State University in 1988. After graduation, he worked as a special correspondent for the Novosti Press Agency (APN). From 1992 to 1994, he was a stringer in the conflict zones in Moldova, Azerbaijan, Armenia, and Tajikistan, a Russian TV correspondent in the Baltic states.

In 1994, he became a freelance, and in 1995, a full-time correspondent for NTV. Since 2000, he has been working on the Rossiya TV channel (VGTRK holding). Since May 2000, he has been an Advisor to the Chairman of the VGTRK Federal State Unitary Enterprise. Then, he headed his studio, “The author's program of Arkady Mamontov.” From March 2012 to July 2014, he was the host of the Special Correspondent program on the Rossiya-1 TV channel. Since October 2017, he has been hosting the Traces of the Empire program and other projects on the Orthodox TV channel Spas.

Active participation in aggressive state propaganda of the Putin regime.

Arkady Mamontov is responsible for the creation and disinformation of information that intentionally distorts reality, deceives people and instills aggression, an atmosphere of fear, hatred, and xenophobia in the interests of the Kremlin. He specialized in inciting anti-Western and anti-Ukrainian sentiments in society.

The basis of the accusation is the official position of the head of the production center, which has been actively used for propaganda purposes for many years. Mamontov has become one of the most striking examples of the devaluation of information and investigative journalism, the abandonment of professional ethical standards for the sake of blind service to the Putin regime. He also repeatedly and openly expressed homophobic views and his commitment to the Orthodox fundamentalism.

Mamontov defines the policy of his studio as “protecting the interests of ordinary people and the Fatherland.” At the same time, according to independent experts and an analysis of the content released by Mamontov’s studio, we can confidently conclude that these are mostly frankly propaganda made on direct orders from the Kremlin.

Mamontov was repeatedly entrusted with the most responsible tasks for the production of propaganda content in crisis situations when Vladimir Putin faced serious threats to his reputation. Thus, it was him, who was allowed on the board of the Peter the Great cruiser at the of the Kursk submarine crash site by personal order of the commander of the Russian Navy, Admiral Vladimir Kuroedov.

Mamontov is the author of propaganda documentaries Paradise Lost, Reverse. Children, Yugoslavia. The decay, Maidan, and others broadcasted on Rossiya-1. In February 2006, he created a fake film about the “spy stones,” which were allegedly used by British intelligence as transmitting devices. According to the pseudo-documentary, the Moscow Helsinki Group and other reputable human rights organizations received funding from the UK. He was awarded the Order of Honor for this film. In the 2012 presidential election, Mamontov campaigned for Vladimir Putin and starred in a commercial in his support.

The series of propaganda films Children, shot by Mamontov’s studio, became one of the most significant contributions to the adoption of the notorious Dima Yakovlev Law, which established a ban on the adoption of Russian children by Westerners as a “response measure” to the Magnitsky Act.

In November 2012, he released the film Provocateurs, which claimed the involvement of Western intelligence agencies and the Georgian government in the actions of Pussy Riot. The propaganda nature of the film, allegedly made in defense of Orthodoxy, provoked outrage not only in society but even among influential figures of the Russian Orthodox Church.

In 2014, he worked actively “at the Ukrainian front” of the information war, presenting the propaganda projects “Bandera: executioners are not heroes,” “MH17: interrupted flight,” “Oligarch” (about Igor Kolomoisky), “Burn” (about the tragic events in Odesa on May 2, 2014). In August 2014, he was included in the sanctions list of Ukraine for supporting the occupation and annexation of Crimea and the aggressive actions of Russia in the South-East of the country.

In April 2015, Mamontov, along with Oleg Dobrodeev (the head of the All-Russian State Television and Radio Broadcasting Company), Vladimir Kulistikov (NTV general director), Dmitry Kiselev (the head of the Rossiya Segodnya news agency), and propaganda journalists Konstantin Semin, Vladimir Solovyov, Andrey Karaulov, and Alexei Pushkov was put on “The Nemtsov List.” Those propagandists, according to the leader of the opposition party RPR-PARNAS Mikhail Kasyanov, “seriously violated human rights and incited hatred against Boris Nemtsov, incited to violence over him,” and should be included in the sanctions list of the Magnitsky Act.

In 2017, he released the so-called documentary investigation “Ukraine. Operation Mazepa,” where, based on fake publications and materials, he “proved” that the Euromaidan revolution in Kyiv in 2014 was a plan developed by the CIA.

Indirect evidence of Mamontov’s complicity in the crimes of the Putin regime is his receiving high awards, including medals of the Order of Merit for the Fatherland of the 1st degree (2014, “for high professionalism and objectivity in reporting on events in the Republic of Crimea”), orders of Badge of Honor (2006), Friendship (2009), medals For Strengthening the Combat Community (1999), and For Assistance to Drug Control Bodies (2009).