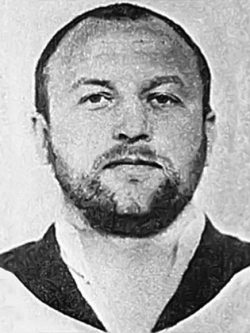 Founder of the Malyshev gang

MALYSHEV, Alexander Ivanovich (b. 1958) is a leader of the Malyshev organized criminal group that operated in Saint Petersburg in the 1990s and later in Spain. Born in Leningrad, he studied in the Leningrad Mechanics and Instrument Engineering College but in 1975 he committed a murder and got a prison sentence. In 1979, he was released on parole. In 1983, he was again jailed for reckless homicide, having received three years in prison. By the late 1980s, he was already accustomed to the criminal world, “working” for the Tambov gang. Soon, Malyshev created his gang, uniting the gangsters who were dissatisfied with the Tambov leaders. Their activity peaked in 1991-1992, Malyshev at that time was considered the leader of the criminal world of St. Petersburg. The group was engaged in racketeering, contract killings, arms, and drug trafficking. In 1992, he got arrested, charged with organizing a criminal group, but the court gave him a sentence for illegal possession of firearms.

In the mid-1990s, the influence of the Malyshev gang began to yield again to the Tambov group, and the leaders of the group chose to take refuge abroad. In 1998, Malyshev received Estonian citizenship illegally and was deprived of it in 2000. In 1999, he got a Spanish passport in the name of Alexander Lagnas Gonzalez. In 2002, he was arrested in Germany at the request of the Estonian authorities, but he was soon released and continued to live in Spain, where the gang continued its criminal activities. In the summer of 2008, Spanish law enforcement agencies conducted a large-scale operation “Troika”, and arrested Alexander Malyshev and his associates. They were charged with racketeering, organization of a criminal group, contract killings and money laundering. Malyshev spent several years under house arrest, and in 2015 he was allowed to leave for Russia, where he remained. Currently, the leaders of the gang, including Alexander Malyshev and Gennady Petrov, live in St. Petersburg. Malyshev owns a stake (16.7%) in Neva LLC, which manages residential real estate and takes part in the execution of state contracts.

The leadership of the Malyshev organized crime group consisted of three people - Gennady Petrov, responsible for contacts with authorities, Sergey Kuzmin, an expert on economics, and Alexander Malyshev. Malyshev was responsible for resolving issues by force. His militants intimidated, beaten, kidnapped, tortured, and sometimes killed their victims. At the time of its heyday, the gang had 2,000 bandits.

The gang leaders had tight connections with the city authorities. When the gambling business was allowed in St. Petersburg in 1991, the Malyshev gang decided to join it through their management company Neva-Chance. The company shared the same legal address with the Committee on External Relations of St. Petersburg. This city body was headed by the future president of the Russian Federation Vladimir Putin at that time, who also chaired the special monitoring committee for city casinos. In May 1992, the Malyshev group opened the first casino in the city, “Casino Neva”. It is noteworthy that their business partner was Kinichi Kamiyasu - one of the leaders of the Japanese yakuza.

After leaving for Spain, Malyshev did not abandon the criminal business. In 2008, the Spanish Prosecutor’s Office, together with the Spanish Civil Guard, arrested Alexander Malyshev and Gennady Petrov on charges of money laundering. According to the investigation, their criminal gang laundered money through companies specially created for this purpose, having acquired property in Spain worth more than 50 million euros. Their indictment includes contacts with a number of senior officials of the Russian Federation, in particular former Defense Minister Anatoly Serdyukov, Deputy Prime Minister Dmitry Kozak, former communications minister Leonid Reiman, State Duma member Vladislav Reznik, deputy head of the Federal Drug Control Service Nikolay Aulov, chairman of the Investigative Committee Alexander Bastrykin and his former deputy Igor Sobolevsky.

Financial fraud is just the tip of the criminal iceberg. “Throughout the investigation, the police had access to thousands of telephone calls of the accused. These conversations testify to the immense power of the arrested mafia bosses, their connections in Russia and the former Soviet republics, the whole spectrum of crimes: murders, arms trafficking, drugs, extortion, bribery, illegal transactions, cobalt, and tobacco smuggling, etc.”, the Spanish newspaper ABC says.

The fact is that St. Petersburg authorities in the 1990s including Vladimir Putin favored mafia business activities and that the Putin regime continues to be well-connected to the criminal groups. It allows us to talk about the current Russian regime as a mafia state, which is completely riddled with corruption. Since the 1990s, only a few individuals have changed, the principles of the relationship between government and mafia have remained the same. The intercepted phone calls showed that Malyshev and Petrov oversaw appointments in the Russian government. It is very unlikely that Putin was not aware of this. The companies associated with them repeatedly overestimated prices for reselling each other real estate in Spain, thereby legalizing criminal profits. There is a real reason to believe that this was one of the ways to fill the offshore wallets of Putin’s inner circle.

The Fate of The Tambovskaya & Malyshevskaya Criminal Gangs in Spain

Gangsters of the Mediterranean