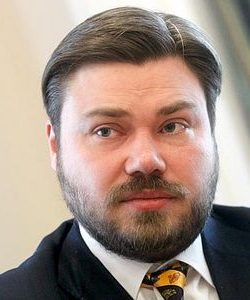 MALOFEEV, Konstantin Valeryevich (b.1974) is a Russian tycoon known as a sponsor of several pro-Kremlin Orthodox and ultra-conservative projects. Born near Moscow, in 1996 he graduated from Moscow State University with a major in law. He started his career as a lawyer in the investment bank Renaissance Capital and later became the head of the Corporate Finance Department at MDM Bank. In 2005, he founded the Marshall Capital Partners group, which specializes in direct investments in telecommunications, media, and technology, as well as real estate and agriculture. In 2007, he founded the St. Basil the Great Foundation and the Russian Society of Philanthropists for the Protection of Motherhood and Childhood. From 2015, he is the Chairman of the Board of Directors of the Tsargrad Media Group, up until 2017, he was the general producer of the Tsargrad TV channel, and currently remains its major shareholder. Since April 2019 he Deputy Head of the World Russian People's Council.

Konstantin Malofeev owns and manages one of the largest non-governmental media holdings, created and being actively used for many years for the state propaganda purposes. He also participates in the organization and sponsorship of illegal military operations in Eastern Ukraine. Konstantin Malofeev is implicitly loyal to the Putin regime and enjoys governmental preferences. Through his investment fund Marshall Capital (MarCap) and its affiliates, he controls one of the largest Russian communication companies Rostelecom.

In 2011, his Saint Basil the Great Foundation and Marshall Capital Partners created a GONGO called Safe Internet League (SIL). Its budget, estimated at tens of millions of dollars, is used to promote and lobby for censorship and other forms of regulations restricting freedom of information. The SIL developed a draft law adopted in 2012 by the State Duma, which allowed authorities to begin a massive out-of-court website blocking in Russia. In 2012, the founder of VK Pavel Durov reported that Malofeev and his SIL organized an information raider attack to force Durov and his partners to sell their shares in this largest Russian social network to the government-friendly businessmen.

In 2014, Malofeev supported the activities to unleash armed aggression against Ukraine in the territory of the Luhansk and Donetsk regions. His associates Alexander Borodai and Igor Strelkov (Girkin) occupied the key positions in the self-proclaimed Donetsk People’s Republic, and the Saint Basil the Great Foundation financed the creation and activities of illegal armed groups of mercenaries from the Russian Federation. On July 22, 2014, the Main Investigative Department of the Ministry of Internal Affairs of Ukraine opened a criminal case against Konstantin Malofeev on suspicion of creating paramilitary or armed groups. He was also placed on the European Union list of individuals sanctioned during the 2014 pro-Russian unrest in Ukraine. On 19 December 2014 he, and his company Marshall Capital Partners, were also placed on the OFAC Specially Designated Nationals List in the United States.

The Tsargrad TV channel created by Malofeev, actively, from one-sided positions and in a pronounced propaganda spirit covered the situation in the south-east of Ukraine, pursued a consistent anti-Western information policy, spreading xenophobia, homophobia and escalating hostility in society. One of the channel’s most notorious products was the “Top 100 Russophobes-2016” rating — a list of “the most ardent haters of Russia according to experts and readers”. The rating included Russian freedom activists who opposed the Russian aggression against Ukraine. Even the Human Rights Council of Russia recognized it as “a provocation containing a mechanism of inciting social hatred”.

In 2019, Malofeev became a defendant in a money-laundering investigation in Bulgaria. It was related to the case of the chairman of the Bulgarian “Russophiles” movement, Nikolai Malinov, accused of spying for Russia. Malofeev was banned from entering Bulgaria for 10 years.

Konstantin Malofeev to Girkin “You killed just the right people

The Russian billionaire carrying out Putin’s will across Europe