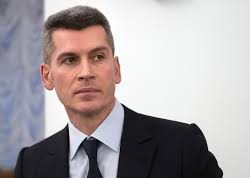 MAGOMEDOV, Ziyavudin Gadzhievich (b. 1968 in Makhachkala) graduated from Moscow State University with a degree in World Economics in 1994. During his studies, he became acquainted with Arkady Dvorkovich (future assistant to Dmitry Medvedev) and Ruben Vardanyan (future founder of Troika Dialog Corporation) and earned his first million. Back in 1989, together with his brother Magomed and cousin, Akhmed Bilalov, he founded a company to supply the first computer equipment to Moscow across the Polish border.

In 1994, they created the company Interfinance, led by Ziyavudin. The corporation's activity was aimed at the takeover of oil companies and banks. In 1995, the Magomedov brothers bought Diamant Bank, which became one of the largest ones due to transactions with state-owned companies and, presumably, was engaged in cashing and lost its license in 2001 after a scandal. In 1997, Magomedov began to trade in petroleum products, creating several oil trading companies, bought a 5% stake in Nizhnevartovskneftegaz, and became the main contractor of Transneft.

In 2001-2002, Magomedov acquired land from the Mari Machine-Building Plant in Primorsk, where later he built Primorsky Commercial Port, the first major asset of the Summa Capital holding group (renamed Summa Group in August 2011). The holding merged Summa Telecom, Transport Group FESCO, OZK, Globalalektroservis, INTEX, Stroynovatsiya, SUIproekt, and other corporations. In 2006, the Mamedov company Slavia bought a 76% stake in Yakutgazprom for 628 million rubles. In the same year, Summa Telecom received frequencies without a tender for the provision of WiMax wireless technology services throughout Russia. Ziyavudin’s brother, Magomed, at that time, was a senator from the Smolensk region (2002-2009).

The rise of Summa came during the presidency of Dmitry Medvedev. In July 2009, Magomedov, through the development company Intex, gained control over the company SUIProject, the general contractor for the reconstruction of the Moscow Bolshoi Theater, which cost the budget more than 35 billion rubles. In 2010, Summa Capital acquired a 50.1% stake in Russia's largest port operator, Novorossiysk Commercial Sea Port (NCSP), which allowed Magomedov to control a significant portion of Russian oil exports to Western Europe. At the end of 2011, the Summa group won the competition for the construction of an oil terminal in Rotterdam, pledging together with the Dutch Vitol to invest $1 billion in its development. In May 2012, Summa bought out 50% minus 1 share of United Grain Company.

In 2015, he founded the Caspian VC Partners venture fund, which then invested in Peek Travel, Uber, Uber China, Diamond Foundry, and Virgin Hyperloop One. Magomedov invested about $100 million in the implementation of the project of a high-speed vacuum train Hyperloop. In 2016, Ziyavudin joined the Board of Hyperloop One, and a year later became its co-chair.

On March 31, 2018, by the decision of the Tverskoy Court of Moscow, Ziyavudin Magomedov and his brother Magomed were detained on suspicion of embezzlement of 2.5 billion rubles and the organization of a criminal community. The embezzlement, according to investigators, was associated with state contracts carried out by engineering companies of the Summa group, in particular, during the construction of the Kaliningrad stadium. Besides, the criminal case included episodes about the activities of the Novorossiysk Commercial Sea Port.

Former one of the “kings of public procurement” Ziyavudin Magomedov fell victim to the undercover political games in the Kremlin and his own greed. He enriched himself sharply during the presidency of Medvedev, but he overlooked the fact that a cohort of oligarchs from Putin’s inner circle continues to be the most influential force. Enriching oneself at the expense of the budget and citizens is safe, though enriching oneself at the expense of Putin’s friends is fraught with consequences.

There are many dubious episodes in Magomedov's business career. Back in 1998, State Duma member Sergei Shashurin accused Transneft’s leadership of financial abuse with the participation of Magomedov’s Diamant bank. Shortly after the bank lost its license “for repeated violation of the law On Banks and Banking Activities,” Deputy Chairman of the Bank of Russia Andrei Kozlov was assassinated. The former chairman of the board of Diamant, Alexei Frenkel, was accused of this murder.

The acquisition by Slavia of Yakutgazprom in 2006 attracted the attention of the Department of Economic Security of the Russian Ministry of Internal Affairs. The companies were accused of conspiracy and illegal additional issues. The department authorized operational-search measures due to the revealed fact of fraud, but the case was closed shortly.

In 2008, The Moscow Post published an article “The Senator from the Smolensk Region Magomed Magomedov does not want to leave the Federation Council. He has important reasons for this.” The article, in particular, indicated that in the late 1990s and mid-2000s, the Magomedov brothers had links with the Dagestan mafia and could be involved in a scandal about the theft of Lukoil’s funds allocated for the reconstruction of the Old Smolensk road.

The reconstruction of the Bolshoi Theater by Magomedov’s company SUIProekt, according to the Accounts Chamber of Russia, cost the Russian budget 35.4 billion rubles. Although the businessman said that he could not make a profit on this project, according to media reports, his company managed to get over 12 billion rubles in construction. The company's contractors said that the reconstruction of the theater was financed through gray schemes using one-day firms.

Magomedov tried to please the Russian leadership. In 2015, Alexei Navalny reported that Ziyavudin Magomedov paid for the vacation of Presidential Press Secretary Dmitry Peskov and his family on a Matlese Falcon yacht, which costs 385 thousand euros per week to rent.

The arrest of the Magomedovs excited political circles in Russia because of their ties with Prime Minister Dmitry Medvedev. For several years, Magomedov was monitored by the special services, who forgave him numerous facts of fraud and overpricing of the cost of state contracts. However, the criminal prosecution of Ziyavudin Magomedov intensified after he tried to sell half of his shares in Omirico Limited, a subsidiary of Transneft state corporation, at a price 2.5 times higher than the market. The head of Transneft, a longtime friend of Vladimir Putin, Nikolai Tokarev decided to discuss a deal with Putin.

Suleiman Kerimov was also called the opponent of the Magomedovs, with whom Summa fought for control of Caucasian assets. Having lost the fight for the Makhachkala port, the brothers initiated a case against Senator Kerimov in France, handing incriminating evidence to the French authorities. There, he was charged with tax evasion when buying a villa on the Cote d'Azur. Assumingly, Putin did not like their decision to hand over Kerimov, a more reliable partner for the Kremlin, to foreign law enforcement.

Big business in Russia, by default, is firmly connected with the Kremlin and shares corrupt business models. The Russian special services have a file with compromising material on every major businessman, which can be used as soon as they try to play independently or refuse to demonstrate loyalty. The West needs to take this into account when conducting joint projects with Russian businesses or imposing sanctions.