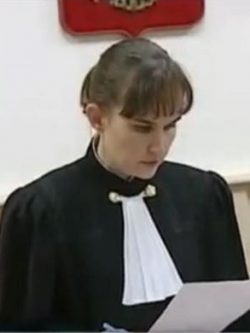 Judge of the Basmanny District Court of Moscow.

Judge Levashova made deliberately unlawful decisions against the activists of the opposition. On October 1, 2013, she extended the detention of Ilya Gushchin and Alexander Margolin, the defendants in the Bolotnaya Square case, until February 6, 2014. She also extended the detention of another Bolotnaya case political prisoner, Leonid Razvozzhayev.

Judge Levashova prolonged the house arrest of Ildar Dadin, who was later sentenced to three years in prison for repeated participation in peaceful protests.

In 2014, she extended the detention of Nadezhda Savchenko. In 2015, she presided at a court session when Savchenko’s lawyers tried to appeal the refusal of investigators of the Investigative Committee to release Savchenko to take part in the PACE session, which took place in January 2015. The judge dismissed the lawyer's complaint.

She ruled a decision to seize the property and bank accounts of Oleg Navalny, the brother of one of the leaders of the Russian opposition. In 2014, she recognized the search in Alexey Navalny’s apartment as legal. She also legalized searches in apartments of three employees of the Anti-Corruption Foundation.