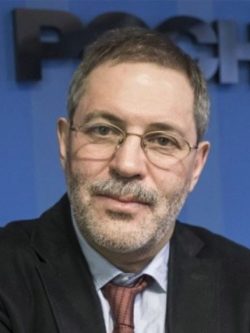 LEONTYEV, Mikhail Vladimirovich (b. 1958) is a high-profile Russian propagandist and Vice President of PR at Rosneft. Born in Moscow, he graduated from the Moscow Institute of National Economy in 1979 and worked at the Institute of Economic Problems of Moscow. In 1989, he started his media career as a Kommersant reporter. The next year, Leontyev headed the department of economics at Nezavisimaya Gazeta. In 1993, he became the first deputy editor-in-chief of the weekly Business MN. In the same year, he co-founded the newspaper Today, was a member of the editorial board, political observer and first deputy chief editor. In 1998, he began working on television, he was the host of the “Actually” and “Seventh Day” programs, and the head of the TVC Channel’s Social and Political Programs Service.

Since 1999 he has been author and presenter of the program Odnako on ORT TV (later - Channel One). In the 2000 presidential election, he supported Vladimir Putin. In 2001, he became a member of the political council of the socio-political movement Eurasia, headed by Alexander Dugin. In 2002 he became a member of the United Russia party. From May 2007 to March 2009 he was the chief editor of the Profile magazine. In 2009, he became the founder of Odnako magazine. Since January 2014, he has been the Press Secretary and Vice President of the state oil corporation Rosneft.

Active participation in aggressive propaganda of the Putin regime, the creation, and dissemination of information that instills an atmosphere of hatred and political intolerance.

The accusation of Leontiev is based on his many years of work as one of the most prominent TV and radio propagandists. He became one of the direct accomplices and beneficiaries of the Putin regime. During the first Chechen war, publicly supported the deployment of Russian troops in Chechnya, claiming that he is “a staunch supporter of a military solution”. Later, after the terrorist attacks in Moscow and Volgodonsk, he called for the bombing of Chechnya.

In all situations related to the alleged or proven participation of Russia in political killings and illegal military operations with numerous victims (poisoning of Litvinenko and Skripal, the MH17 downing, crimes against humanity in Syria, the murder of Nemtsov, etc.), he always advocated Russian security officials and authorities and denounced the “enemies of Russia”, primarily the United States and Britain.

He is an ardent opponent of the independence, sovereignty and European choice of Ukraine. In February 2014, he publicly supported Ukrainian riot police regiment Berkut, which was accused of violence and killings of protestors in Kyiv. After the Russian annexation of Crimea, incitement of the anti-Ukrainian hysteria has become mainline in Leontiev’s speeches and public comments. In August 2014, the National Television and Radio Broadcasting Council of Ukraine included Leontiev on the sanctions list for publicly supporting the occupation of Crimea and Russia's aggression against Ukraine. On September 21, 2018, on a live broadcast of the Formula Sense program on Vesti-FM radio, Leontiev stated that Russia “[Russia] should have had to solve this issue when Ukraine had no army at all 2014 had... This Ukraine should be finished. This bestiality is smelly. This is Nazi resuscitation on Russian soil”.

Leontyev is a permanent member, expert and, author of Izborsk Club, one of the leading intellectual propaganda centers of the so-called state-patriotic ideology based on the postulates of “Eurasianism”, “Russian world”, etc. The fact that Leontiev was appointed to the post of chief PR manager of Rosneft, one of the key pillars of the Putin regime, led by Vladimir Putin’s closest partner Igor Sechin, is evidence of his high status in the Russian propaganda hierarchy.