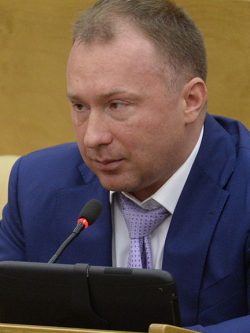 Deputy Chairman of the State Duma of the Russian Federation; a son of Vladimir Zhirinovsky, the leader of the Liberal-Democratic Party of Russia (LDPR)

Igor Lebedev, as one of the leaders of the LDPR faction and deputy speaker of the lower house of the Russian parliament, is responsible for all the laws proposed and supported by his faction in the State Duma of the sixth and seventh convocations. The Kremlin actively uses the LDPR party where the reputational costs for the ruling United Russia party can be too high. For example, the LDPR initiated the majority of the notorious laws adopted in recent years: the law on “foreign agents,” the law on censorship of the Internet, the “law of scoundrels (prohibition to adopt Russian orphans by Westerners),” etc. Earlier, in the 2007 election, Lebedev ceded his place on the party’s federal list to guarantee the election of Andrei Lugovoy, former FSB operative who assassinated Alexander Litvinenko.

Being paid from the federal budget, Lebedev’s real incomes dramatically exceed official ones. Moreover, he owns undeclared foreign real estate. In 2014, Alexei Navalny found Lebedev’s 442 square meters’ apartment in the Dubai Botanica tower. It cost Igor Lebedev 87 million rubles, but the politician’s declaration did not mention this. Currently, an apartment of similar footage in this area costs about 136.9 million rubles ($2.4 million). Lebedev called the investigation of Navalny a delirium and provocation. In February 2019, the Baza project announced that the Lebedev family owns two hotels, a villa, and apartments in Spain. Among the hotels were Hotel Azul in Barcelona, Azuline Hotel in Ibiza, and Altea Hills Villa in Alicante. Moreover, his mother is the founder of a company that owns a three-star hotel in Ibiza. In 2014, the EU imposed sanctions on Lebedev due to Russia's aggression against Ukraine.