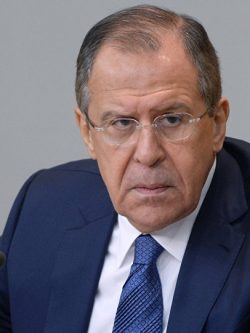 LAVROV, Sergey Viktorovich (b.1950) is a Russian diplomat and a current Minister of Foreign Affairs of the Russian Federation. Born in Moscow, in 1972 he graduated from the prestigious Moscow State Institute of International Relations where he studied Sinhalese, Dhivehi, English, and French languages. He started his diplomatic career in the Soviet Embassy in Sri Lanka. From 1976 to 1981 he worked in the Section for the International Economic Relations of the Soviet Foreign Ministry. Between 1981 and 1988 he served at the Soviet mission at the United Nations in New York City. From 1988 to 1992 he held senior positions in the departments of the Foreign Ministry in Moscow. He was a member of the Communist Party of the Soviet Union up until its ban in August 1991. In 1992, he was appointed Deputy Foreign Minister of Russia. For ten years, between 1994 and 2004, he had been the Permanent Representative of Russia in the United Nations Security Council. On 9 March 2004, President Vladimir Putin appointed Lavrov to the post of Minister of Foreign Affairs of the Russian Federation.

Sergey Lavrov is a key figure who defines Russia's foreign policy after Vladimir Putin despite not being a part of Putin's inner sanctum initially. As Minister of Foreign Affairs of Russia, Lavrov always obediently carried out Putin’s will. He turned the Russian Foreign Ministry into one of the most effective tools of external aggression. Under minister Lavrov, Russia entered an era of confrontation with the West. That led to the isolation and stigmatization of the country in the international arena.

Sergey Lavrov consistently supported Russia's external aggression against its neighbors and other states. In 2008, Lavrov provided diplomatic support for the “five-day war” against Georgia. In 2014, he actively participated in the diplomatic justification of the annexation of Crimea and the Russian involvement in the outbreak of war in the South-East of Ukraine. In 2015, he supported the Russian military campaign in Syria as Minister of Foreign Affairs. The military operation aimed at maintaining the dictatorial regime of Bashar al-Assad, which led to a large number of civilians being killed. Under Lavrov, the Russian Foreign Ministry continuously justifies human rights violations in Russia and employs a large number of secret police agents under the diplomatic cover.

Lavrov in Syria to Strongly Back Assad

Chechnya gay purge: Russian foreign minister says claims of abuse are ‘not based on fact’