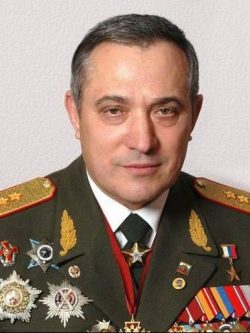 From August 1993 to February 1995, he was deputy and first deputy of the main operations department of the General Staff. From December 1994 to February 1995, he was the commander of the combined group of federal troops in Chechnya. In February 1995, Kvashnin was the commander of the troops of the North Caucasus Military District. On May 23, 1997, he was appointed Chief of the General Staff of the Armed Forces - First Deputy Minister of Defense of the Russian Federation. On July 19, 2004, he was relieved of this post. From September 9, 2004, to September 9, 2010, Kvashnin served as the Plenipotentiary Representative of the President of the Russian Federation in the Siberian Federal District. Between 2000 and 2010, he was a member of the Security Council of the Russian Federation.

Participating in war crimes during both Chechen campaigns; inept command, resulting in significant casualties among the personnel of the Russian army.

Many colleagues ranked Kvashnin among people who obey orders from their superiors without hesitation. When President Yeltsin decided to send troops to Chechnya, then Minister of Defense Pavel Grachev proposed taking command of them first to the deputy commander in chief of the ground forces, Eduard Vorobyev, and then to his deputy, Georgy Kondratyev. Both refused, as they well understood that the army was not ready for this war. Kvashnin immediately agreed. It was under the leadership of Kvashnin that Russian troops stormed Grozny on New Year's Eve on December 31, 1994, while suffering heavy losses. The almost completely destroyed 131st Maykop brigade was part of the northern military group, which was personally supervised by Kvashnin. The commander did not bear any responsibility for the failure of the operation and the death of hundreds of people. Kvashnin was also accused of failure of the siege of the village of Novogroznensky, where Aslan Maskhadov’s headquarters were located, and also of the defeat of the 205th brigade on the outskirts of Grozny in 1996.

By the beginning of the second Chechen campaign, Kvashnin was already the chief of the General Staff and was considered one of the initiators of the outbreak of war. As the chief of the General Staff, General Kvashnin is responsible for the strategy of the federal troops. The strategy was based on the use of massive artillery shelling and aerial bombardment to minimize direct contact with Chechen armed groups. At the same time, Chechen settlements were subjected to massive bombardments with the intention that Chechen armed units leave these settlements before federal troops enter it. “Cleansing” operations were carried out to ensure that no rebels remained in the village. Accordingly, such tactics led to numerous casualties among the civilian population and significant destruction of civilian infrastructure.