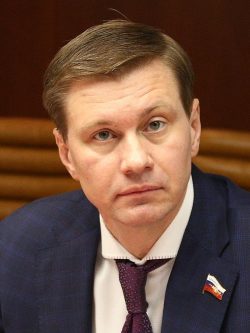 Deputy Chairman of the Federation Council Committee on Federal Structure, Regional Policy, Local Self-Government and Affairs of the North, representative of the legislative (representative) body of state power of the Kemerovo Region - Kuzbass. Position before election (appointment): General Director of SDS- Energo Holding Company LLC ; Deputy of the Kemerovo City Council of People's Deputies of the fifth convocation.

Public support for Russian military aggression against Ukraine. Dmitry Kuzmin is included in the report "1500 warmongers" compiled by the Free Russia Forum. The report contains the names of Russian public figures, military commanders, members of the parliament, propagandists, artists and athletes who have publicly spoken out in support of Putin's aggression or are directly involved in it. The Free Russia Forum is seeking sanctions against them in the European Union.