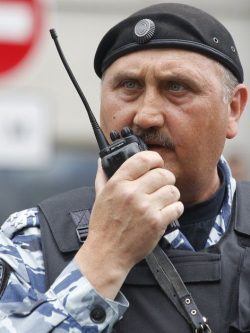 KUSYUK, Sergei Nikolayevich (Ukrainian: Кусюк Сергій Миколайович) was born on December 1, 1966, in the village of Mala Mochulka, Vinnytsia region in Ukraine. He became known as one of the commanders of the Kyiv Berkut regiment at least since 2010, he led the dispersal of several anti-government protests. Sergei Kusyuk became particularly known for the brutal beating of students on Independence Square in Kyiv on November 30, 2013, which provoked a wide-scale Euromaidan. During the Euromaidan, he coordinated the actions of the Berkut. On February 21, 2014, Kusyuk ordered the distribution of more than two hundred firearms to the Berkut fighters, of which at least 48 protesters died on the same day. After the victory of the Revolution of Dignity, Kusyuk, together with 67 other Berkut fighters, fled to Crimea and received Russian citizenship. In 2015, the Prosecutor General's Office of Ukraine put Kusyuk on the wanted list. In December 2017, the United States placed Kusyuk on the Magnitsky Act’s list of human rights abusers. At the moment, Kusyuk is a colonel of the Russian National Guard (Rosgvardiya). In recent years, journalists noticed him during the dispersal of peaceful protests in Moscow.

According to Ukrainian journalist and politician Mustafa Nayem, Verkhovna Rada member Igor Lutsenko, as well as journalist Anastasia Stanko, Kusyuk began to participate in the suppression of protests long before Euromaidan. In April 2010, he was spotted at a protest rally against the ratification of Kharkiv agreements to extend the Russian Black Sea Fleet’s stay in Ukraine. In 2012, as part of a group of Berkut fighters, he attacked and beat several activists in protests near the Ippodrom metro station. In October 2013, Kusyuk was spotted in a video filmed near the Kyiv city administration building, where he threw a smoke bomb at a crowd of protesters. The police accused protesters of using smoke bombs in this episode. On December 10, 2013, he commanded an attack on the House of Trade Unions, the headquarters of Euromaidan. Kusyuk is considered to be involved in the massacres of protesters in central Kyiv in February 2014. Ukrainian Interior Ministry says that Colonel Sergei Kusyuk ordered to destroy all the documentation on the Berkut activities during Euromaidan.

On June 12, 2017, Sergey Kusyuk commanded the violent dispersal and detention of opposition members during an anti-corruption protest on Tverskaya Street in Moscow. On that day, 866 people were detained in Moscow and up to 1800 people throughout the country. On August 3, 2019, Sergey Kusyuk also led the dispersal of the protest and the detention of participants in a peaceful rally for allowing independent candidates to run for the Moscow City Duma. More than eight hundred people were detained, riot policemen beat dozens of participants of an “unauthorized rally”.

Yanukovych’s cops made a career in Moscow