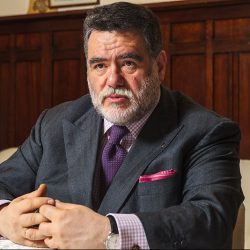 Russian entrepreneur and chairman of the supervisory board of the Bosco di Ciliegi Group. Deputy Chairman of the Public Chamber of Moscow.

KUSNIROVICH, Mikhail Ernestovich (b. 1966 in Moscow) graduated from the Moscow Institute of Chemical Technology with a degree in chemical engineering in 1989. Then, together with student friends Sergei Evteev, Evgeni Balakin, and Mikhail Vlasov, he created the East and West Moscow International House company, the first project of which was the organization of an amusement park in Gorky Park. In 1989-1991, he worked at the IMA-Press publishing house (the youth division of the Novosti press agency), where he was deputy secretary of the Komsomol committee. In the August days of 1991, 24-year-old Mikhail Kusnirovich was on the barricades at the Supreme Council (“White House”), where he defended young democracy during the August coup.

At one of the business parties at that turbulent time, Kusnirovich met Serilio Montanari, president of SIMA, Italy’s largest men's clothing company. Soon, Kusnirovich signed a contract with him. A few months later, in March 1992, Kusnirovich and his fellows opened the first apparel store in Petrovsky Passage. In 1993, Kusnirovich received a 50% stake in the new company Bosco di Ciliegi (Cherry Forest).

In 2019, Kusnirovich was among the list of 200 richest people in Russia, compiled by Forbes magazine. His fortune is estimated at $500 million. Kusnirovich manages more than 200 single-brand and multi-brand boutiques, as well as the Moscow GUM (the Upper Trading Rows), which is leased to Bosco di Ciliegi until 2059. The rental agreement was concluded without a tender, and its value declared a state secret. Since April 2013, he has been Deputy Chairman of the Public Chamber of Moscow. In the 2018 presidential election, Kusnirovich was a confidant of President Putin.

Using corruption schemes and Putin's support for gaining a non-competitive advantage in business (renting the Upper Trading Rows and outfitting the national team).

Long gone are the days when Kusnirovich fought for freedom. Now he is a loyal supporter of Putin and calls modern oppositionists who advocate fair elections provocateurs. He forbade the International Olympic Committee to use the Bosco logo (although he had won a competition for the supply of clothing for IOC employees) in revenge for the removal of the Russian team due to a doping scandal.

Bosco, a previously little-known company, has been developing and supplying uniforms to Russian Olympians since 2002 when it won a competition with Adidas and Pierre Cardin. But in January 2017, the contract expired, and it decided not to renew it. Throughout all these years there have been many complaints about the uniform that the company produced. Athletes stated that they were in hopeless and rather humiliating conditions. For example, they could not refuse to wear uncomfortable shoes because it was impossible to criticize the uniform out loud. At the Turin Olympics in 2006, presidents of various sports federations opposed the “seizure” of their athletes for parties at Bosco Village. This happened immediately after the Olympics. Moreover, Mikhail Kusnirovich and members of his team, using the status of official sponsors, redrew the daily routine of the Russian teams and the training schedules of individual athletes.

The government allowed the GUM Trading House, controlled by Kusnirovich, to rent the building of the Upper Trading Rows (GUM on Red Square) without a tender for 49 years in 2014. The lawyers of the Anti-Corruption Foundation did not succeed to obtain disclosure of data on the price of transferring precious state property to Kusnirovich even through a court. However, judging by the financial documents, the joint-stock company paid 301 million rubles for the lease in 2014, and 298 million in 2015 (around $5 million). Then the media, citing anonymous sources, reported that the authorities would revise the rate for Kusnirovich upwards.

As the Interlocutor found out, the Federal Property Management Agency forced the entrepreneur to pay more, but one still can’t reveal the market price. According to the report of the company, the rental of GUM cost 1 billion 266 million rubles in 2016. The area of ​​the premises is about 75 thousand square meters. Thus, one square meter costs less than 17 thousand rubles per year for Kusnirovich, which is much lower than the average rental rates for shopping malls in the capital. At the same time, Kusnirovich’s mall is located at Red Square and occupies the historic building. The rental rate of similar shopping centers in the center of Moscow is usually two to three times higher. For example, the rental rate of a shopping center Nikolsky Passage is 35 thousand rubles per square meter.

According to open reporting alone, the proceeds from sublease at the GUM are 4 billion rubles, and net profit is 1.1 billion rubles. And there is almost no doubt that this amount is significantly underestimated to save on taxes. Kusnirovich collects not only a fixed lease but also a percentage of the turnover from his clients. According to rough estimates, the state budget does not receive three billion rubles a year in taxes from the GUM. It is noteworthy that in the annual report this company prides itself on “continuing to restrain the growth of costs due to remuneration,” that is, by not paying enough to its employees.

Kusnirovich controls GUM JSC through the East and West Group, which has two co-founders - Kusnirovich himself and the British company Findome Holding Ltd. The director of the company is a citizen of Cyprus Georgios Nicolau, and the headquarters of the organization is located in an empty office in central London. Curiously, the board of directors of GUM JSC includes, among others, the Kremlin political strategist, the president of the IMA Group Andrei Gnatyuk and the president of the Barschevsky and Partners bar association Samvel Karakhanyan.

HOW TO SELECT RUSSIAN OLIGARCHS FOR NEW SANCTIONS?