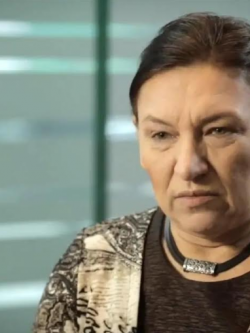 Director-General of the Autonomous Non-Profit Organization for the Development of Sociocultural Activities “Center for Sociocultural Expertise” (CSE) since 2014.

According to the official website of the CSE, Natalya Kryukova has a degree in mathematics (1981), she was qualified as a mathematics teacher; kandidat of pedagogical sciences (1990).

Fabrication of evidence base for the implementation of political repression and suppression of freedom of conscience.

Natalia Kryukova, together with Vitaly Batov, heads the infamous Center for Socio-Cultural Expertise. The office became infamous for its psychological and linguistic expertise, which is used to substantiate evidence of guilt in politically motivated criminal cases against opponents of the Putin regime. In particular, they did the expertise in the criminal cases of Yuri Dmitriev and Pussy Riot, as well as in the case of recognizing Jehovah's Witnesses as extremists.

However, even before the organization was founded in 2014, Kryukova and Batov had established themselves as experts loyal to the Kremlin, despite the lack of specialized education. So, they made an expert opinion for the criminal case of a member of the National Bolshevik Party Nikolai Avdyushenkov. He was accused of keeping at home various (which became extremist after the ban) symbols of the National Bolsheviks. The accusation against Avdyushenkov was based on a psychological and linguistic examination of the content of the leaflets, which were found at his house during a search, compiled by the CSE. His leaflet “Kill the slave in yourself!” was recognized as extremist by the authors of the linguistic expertise, it revealed “a call to violence against oneself.” In 2010, they found extremism in the slogans “Russia for Russians!” and “Orthodoxy or death!” Both slogans were found by employees of the Moscow prosecutor's office on T-shirts sold on the Internet. The court recognized the inscriptions as extremist and banned them. In 2011, CSE experts admitted that the logo of the anti-corruption project Rospil by politician Alexei Navalny (a two-headed eagle with hacksaws in its claws) is the outrage over the state emblem.

Alexander Verkhovsky, director of the SOVA Information and Analytical Center, characterizes Kryukova and Batov as “legendary experts who are ready to write absolutely anything about anything <...> and with the result that is always required from them.”

Dmitry Dubrovsky, a researcher at the Center for Independent Sociological Research and Academic Director of the Expert Community and the Problem of Human Rights in Russia project, in an interview with Novaya Gazeta columnist Galina Mursalieva, points out that the experts of the Center for Sociocultural Expertise have gained considerable fame as “investigation’s puppy experts”... Dubrovsky believes that there are relatively few such experts in Russia, but their value for the prosecution is very high, since these experts write “an incredible amount of absurdity” in the shortest possible time, always supporting the prosecution. Dubrovsky notes the incompetence of the center's staff, pointing out as an example that Natalia Kryukova, a candidate of pedagogical sciences, who worked as a mathematics teacher, and two other experts of the center, who are neither religious scholars nor linguists, performed a linguistic-religious forensic examination and found several books of Jehovah's Witnesses as extremist.

According to the “Conclusion of experts” of CSE of January 9, 2017, concerning nine (out of more than two hundred) photographs of Yuri Dmitriev's adopted daughter, Natalya, Natalia Kryukova concluded that these images are pornographic materials.

Yuri Dmitriev, a Karelian historian and human rights activist and head of the local branch of the Memorial Society, devoted his life to researching the burial sites of victims of mass repressions of the 1930s-1940s of the last century. The largest find of Dmitriev is the Sandarmokh, the place where 9 thousand prisoners from Solovki and Belomorkanal camps were shot. Dmitriev found the names of these people in the FSB archives, compiled lists, and began distributing them to everyone interested in the fate of their loved ones. Sandarmokh turned into a national memorial, and mass mourning events at this place began to irritate the local authorities and Russian special services, which publicly declare themselves to be the heirs of Stalin's notorious NKVD.

In 2017, Dmitriev was charged with making pornographic materials with his adopted eight-year-old daughter and lecherous acts. However, the independent examination confirmed that Dmitriev really used his daughter's pictures to monitor the child's health. On April 5, 2018, the Petrozavodsk City Court acquitted the historian on these two counts. Then Dmitriev was sentenced to two and a half years of restriction of freedom under Article 222 of the Criminal Code (illegal possession of weapons): during an examination of the apartment in December 2016, fragments of a hunting weapon were seized from him.

Yuri Dmitriev was re-arrested a few weeks after his acquittal. According to the attorney, the accusation was based on conversations between the girl's grandmother, a psychologist, and an investigator, with Dmitriev’s adopted daughter. The lawyer believes that the psychologist was in contact with the investigator and became a tool of pressure on the child. On July 22, 2020, at a repeated trial, Dmitriev was found guilty under the article on violent acts of a sexual nature against his underage adopted daughter (paragraph “b”, part 4 of article 132 of the Criminal Code). He was acquitted under the articles on lecherous acts (part 3 of Art. 135 of the Criminal Code), on the production of pornography (Art. 242.2 of the Criminal Code), and on the possession of weapons (part 1 of Art. 222 of the Criminal Code). He was sentenced to three years in prison, but given that he had served in a pre-trial detention center, Dmitriev could have been released in November. All the trials were behind closed doors, and Dmitriev denied his guilt.

Complaints of the defense and charges against the verdict of the historian have been considered in the Supreme Court of Karelia since September 16. The prosecution asked to increase the sentence to 13 years in a maximum-security colony. Dmitriev's lawyer Viktor Anufriev was isolated due to illness, but the court refused to postpone the hearing until his recovery and appointed another defender to the historian. On the eve of the session of the Supreme Court, a group of 250 scientists, art workers, journalists, and priests appealed to the Chairman of the Armed Forces of Karelia with a request to postpone the consideration of the case to any other court, noting the decisions of Judge Alla Rats, which the public activists associated with possible pressure on her.

On September 29, 2020, the Supreme Court of Karelia, represented by Judge Alla Vyacheslavovna Rats, considered the appeal against the verdict of the historian Yuri Dmitriev in the case of sexual violence and satisfied the prosecution's complaint, increasing his term from 3.5 to 13 years in a maximum-security colony.

Unusual, even for Russia Historian Yuri Dmitriev was set to go free in November. Then a court added 9.5 years to his prison sentence.