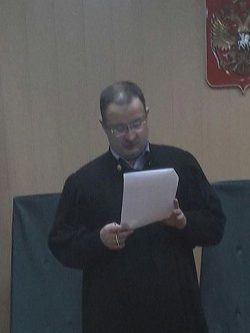 (Proposed for inclusion in the Putin’s List)
Federal Judge of the Tverskoy District Court of Moscow.

KRIVORUCHKO, Alexei Vyacheslavovich is a Russian judge included in the Magnitsky Act and responsible for carrying out repressions against the opponents of Putin’s regime in Russia. He was born on August 25, 1977, in the city of Dmitrov, Moscow Region. In 1998, he graduated from the Moscow Institute of the Ministry of Internal Affairs of Russia. On July 7, 2004, he was appointed magistrate of a court in the Tverskoy District of Moscow, and on March 1, 2008, he was appointed a federal judge of the Tverskoy District Court of Moscow.

Alexey Krivoruchko is one of the most notorious judges of Putin's Russia, whose “track record” includes a number of inhumane politically motivated sentences and court decisions. Apart from the Magnitsky case, he is one of the main executors of the Moscow case — the criminal persecution of the protesters that were rallying against the prohibition of independent candidates from participation in the election to the Moscow City Duma in 2019.

Judge Krivoruchko twice, in January and September 2009, extended the arrest of the lawyer Sergei Magnitsky. Krivoruchko ignored all the arguments and complains of Magnitsky and his lawyers about the refusal of medical care in prison, torture conditions and illegal prosecution by the Interior Ministry officers he testified against. During the last extension of his arrest, Sergei Magnitsky died in prison seven days prior to the release. The US and UK have included Judge Krivoruchko in the Magnitsky Act list as a person directly involved in Magnitsky's death and responsible for human rights violations.

On August 15, 2011, Krivoruchko upheld the decision of Judge Borovkova on the arrest of political activists Igor Shchuka, Polina Ivanova and Stanislav Pozdnyakov for participating in a peaceful rally on August 12. The lawyer of the arrested brought evidence that the police reports were fake but Mr. Krivoruchko ignored it.

On October 28, 2011, a panel of three judges, including Krivoruchko, sentenced the activists of the Other Russia movement, Igor Berezyuk, Kirill Unchuk, Ruslan Khubaev, Alexander Kosevin and Leonid Panin, to prison terms from 2 to 5.5 years for participating in a protest rally on Manezhnaya Square on December 11, 2010.

On December 7, 2011, Judge Krivoruchko upheld the decision to arrest opposition leaders Aleksei Navalny and Ilya Yashin for 15 days, stating that he does not believe their testimony. On February 25, 2014, Krivoruchko sentenced Alexey Navalny to 7 days of administrative arrest for participating in a picket on Manezhnaya Square on February 24, 2014, in support of the political activists — defendants in the Bolotnaya case, who were convicted on the same day.

On August 10, 2017, Judge Krivoruchko convicted 4 activists of the initiative group who tried to organize an all-Russian referendum to adopt a law that would increase the responsibility of public officials. Journalist Alexander Sokolov was sentenced to 3.5 years in prison, Valery Parfenov and Kirill Barabash got four years in prison and Yuri Mukhin, the inspirer and author of the idea got a suspended sentence. Mr. Sokolov was formally convicted of “inciting hatred and hostility to a social group senior Russian officials.” In fact, the trial and conviction coincided with the publication of some of his anti-corruption investigations.

On September 16, 2019, Judge Aleksei Krivoruchko sentenced 24-year-old Pavel Ustinov to 3.5 years of prison under part 2 of Art. 318 of the Criminal Code (the use of violence dangerous to life and health against a representative of the authorities) for “attacking an employee of the National Guard (Rorgvardiya).” The case concerned violent dispersal of a peaceful protest in support of unregistered candidates for the Moscow City Duma, which took place on August 3rd. Judge Krivoruchko refused to watch videos proving that Ustinov did not shout slogans before his arrest and did not resist the detention. Ustinov himself claimed that he did not participate in the rally and came to meet a friend. According to the prosecution, he allegedly sprained policeman's shoulder, thereby “humiliating his honor, causing moral suffering and physical damage.” The Memorial Human Rights Center recognized Pavel Ustinov as a political prisoner.

A guide to the Russian officials on the U.S. Magnitsky list