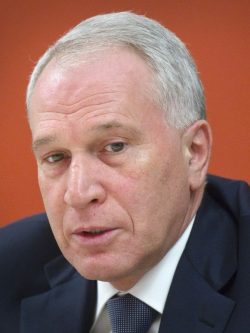 The main shareholder of the Rossiya bank

KOVALCHUK, Yuri Valentinovich (b. 1951) is a Russian banker and a close associate of Vladimir Putin and is widely considered Putin’s banker. Born in Leningrad, he graduated from the Physics Department of Leningrad State University in 1994. In 1977, Kovalchuk began working at the Ioffe Institute of Physics and Technology, and in 1985 he became Doctor of Physics and Technology and in 1987 - First Deputy Director of the Physicotechnical Institute. In 1991, Kovalchuk resigned from the Physicotechnical Institute due to a conflict with the director, Zhores Alferov. In February 1991, Kovalchuk became vice president of the Association of Joint Ventures of St. Petersburg (ASP). Vladimir Putin, the chairman of the committee on external relations, supervised the association from the city government side. The cooperation grew into a strong friendship, and in 1996 they established a notorious dacha cooperative “Ozero” near Priozersk. Later, all its members became billionaires or high-ranking officials.

In the same 1991, Kovalchuk took part in the re-establishment of the Rossiya Bank, organized in 1990 to service the regional committee of the Communist Party and the KGB. The bank’s activities were suspended after the 1991 August coup but soon the mayor of St. Petersburg Anatoly Sobchak instructed Putin to create a foundation based on the bank for stabilizing the economy of St. Petersburg and the region. In December 1991, Putin sold the bank shares to members of the ASP, including Kovalchuk. In December 1992, Kovalchuk became Deputy Chairman of the Board of Directors of the bank. Soon, the city administration began using the bank for its foreign economic operations. After Putin became President, Kovalchuk’s things went uphill. In November 2000, he became Chairman of the Board of the St. Petersburg Center for Strategic Research Foundation North-West, created with the money of Rossiya Bank. In May 2004, Yuri Kovalchuk became the largest shareholder and Chairman of the Board of Directors of Rossiya Bank, which became known as the Bank of President’s friends. The same year, the bank acquired the SOGAZ insurance group from Gazprom. Shortly, Gazprom, Russian Railways, Rosneft and other major state corporations became its customers. In 2012, Kovalchuk resigned as Chairman of Rossiya Bank but remained his largest shareholder.

In 2005, Kovalchuk became the largest shareholder of the Petersburg-Fifth Channel media holding. In 2008, Kovalchuk took part in the creation of the National Media Group, which included the federal TV channels REN TV, Channel One, Channel Five, the Izvestia newspaper and other key media. Kovalchuk was one of several individuals sanctioned by the U.S. Treasury Department on 20 March 2014 in response to the 2014 Crimean crisis. According to the U.S. Treasury, Kovalchuk is a close advisor to President Putin and has been referred to as one of his “cashiers”.

Yuri Kovalchuk belongs to the Putin cohort of oligarchs - people from the president’s inner circle who fabulously enriched after 2000. They are considered to be only nominal owners of their assets, in fact serving as property holders and launders of the president’s finances. Rossiya Bank was involved in several suspicious transactions, which directly or indirectly indicates an artificial, government-directed increase in the assets of its beneficiaries - close associates of Vladimir Putin.

In February 2004, Russian presidential candidate Ivan Rybkin published an article in the Kommersant newspaper headed “Putin has no right to power in Russia”. In it, Rybkin claimed that Kovalchuk and his brother Mikhail (since 2001 - scientific secretary of the Council on Science and High Technology under President Putin, director of the Kurchatov Institute since 2005), along with Roman Abramovich and Gennady Timchenko, “were responsible for the business” of Vladimir Putin whom he called the largest oligarch in Russia. In his interviews, Rybkin said that Kovalchuk and Timchenko controlled the financial flows of Sovcomflot and the Novorossiysk Shipping Company. He also said that Kovalchuk controlled the personnel policy of Eurofinance Bank, which, in turn, controlled the ORT and NTV federal TV channels.

Boris Nemtsov and Vladimir Milov in their report “What 10 Years of Putin Have Brought” published in 2010 demanded to find out how and why Kovalchuk and Rossiya bank gained control over the largest private pension fund, Gazfond, and stakes in Gazprom Media and Gazprombank. The authors of the report also claimed that Kovalchuk was only a nominal owner, and Putin himself was the real owner of the Rossiya bank assets.

In August 2010, Rossiya Bank took over another Gazprom subsidiary, Gazenergoprombank (GEP). As a result, the assets of Rossiya bank increased by 129.5%, which allowed the bank to enter the top 20 Russian banks. As a result of the agreement, the GEP shareholders received a 16.7% stake in the combined bank. According to the statement of Rossiya Bank, the parties agreed on such a percentage based on the cost of all assets of each of the participants in the transaction. However, the share conversion ratio was repeatedly questioned by experts, since at the time of the merger, the value of the GEP assets was higher than that of Rossiya bank. According to Interfax, the bank’s assets in 2010 amounted to 104.3 billion rubles and the GEP ones - to 138.6 billion rubles.

Under the direct leadership of Kovalchuk, Rossiya bank accumulated the most profitable assets and Putin's circle was pumped up in cash. These funds were used to further strengthen the power of the ruling group within the country, and to purchase the loyalty of internal and external elites. Rossiya Bank had close ties with the Tambov and Malyshev criminal groups since the 1990s, whose representatives were among its shareholders. The US, Canada, and the EU imposed sanctions against it by no accident. Having become an extremely toxic asset for foreign investors, it concentrated its activity on the domestic market and is actively working in the occupied Crimea.

The Origin of Putin’s Oligarchy

How the 1980s Explains Vladimir Putin. The Ozero group