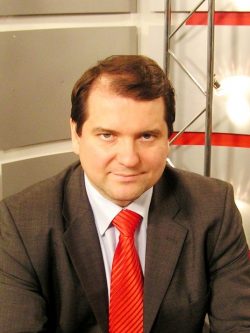 KORNILOV, Vladimir Vladimirovich (b. 1968) is an anti-Ukrainian propagandist, a supporter of the so-called “Russian world,” ex-director of the Ukrainian branch of the Institute of the CIS Countries. He is a permanent participant in the Russian propaganda TV shows, an observer of the Russia Today International Information Agency. He is regularly published on propaganda websites Ukraina.ru and Politnavigator.

In the 1990s, he worked as a political consultant in Ukraine. He organized the elections of various levels. Later, he created and headed the Center for Strategic Planning. In 1995-1999, he was editor of the politics department of the Komsomolskaya Pravda - Donbas newspaper. He was a member of the Council of the organization “Russian-speaking Ukraine,” which aimed to “protect the Russian language” in Ukraine, was an active participant in the Donbas Inter-Movement. Since 2006, he has been heading the Ukrainian branch of the Institute of the CIS Countries. That is a non-profit organization established in April 1996. Among the founders are the Moscow government, the Russian Academy of Sciences, MGIMO, Ministry of Foreign Affairs of the Russian Federation, Moscow State University, etc. Its founder is a State Duma member Konstantin Zatulin.

In 2011, he received gratitude from Putin “for the great contribution to the development and strengthening of relations of friendship and cooperation between the Russian Federation and Ukraine.” In 2011 he published the book “Donetsk-Kryvyi Rih Republic: The Killed Dream.” In July 2013, he resigned as director of the Ukrainian branch of the Institute of the CIS Countries and left Kyiv. In Moscow, he headed the new body, the Center for Eurasian Studies. In 2015, he co-authored the book “How Elections Are Won in the USA, Great Britain, and the European Union: An Analysis of Political Technologies,” which received the Silver Archer award from the Russian authorities.

Сomplicity in the aggressive war launched by the Kremlin against Ukraine, anti-Ukrainian propaganda.

Kornilov is known for inciting separatism in eastern Ukraine and the Crimea, systematically supporting the Russian occupation of Ukrainian territories not only after the outbreak of the war in the Donbas but also for a long time before it. In particular, in 2013, he published a propaganda article “EUROBEASTS: the anatomy of “pro-European lawlessness.”

During one of the broadcasts on Russian TV, Kornilov stated that the members of the Ukrainian parliament are calling for executions of all the people who work on the Russian-occupied territories of Eastern Ukraine. On the air of Vladimir Solovyov’s TV program, he called for the imposition of sanctions against Ukraine for the implementation of the law on language.